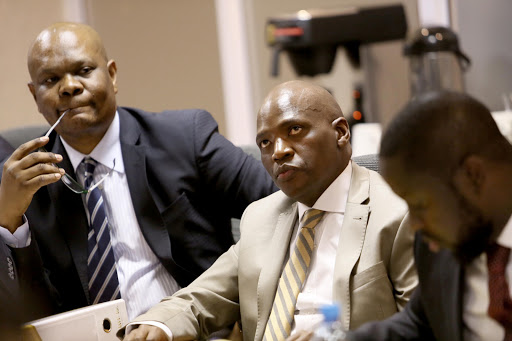 Former SABC COO Hlaudi Motsoeneng, with his lawyer Zola Majavu, appeared before a disciplinary hearing on comments he made at a media briefing in Sandton.
Image: ALON SKUY/ THE TIMES

Former SABC COO Hlaudi Motsoeneng has tried to have his disciplinary hearing halted by alleging that comments made during an April media conference were “protected public disclosure” – a defence usually used by whistleblowers.

Motsoeneng is facing disciplinary charges over a media conference he held last month at which he criticised the interim SABC board for planning to scrap the 90% local music policy he had set up.

On Thursday morning his legal team argued that the hearing‚ being chaired by Advocate Nazeem Cassim‚ should rather be heard at the Commission for Conciliation‚ Mediation and Arbitration (CCMA).

Advocate Andy Bester‚ arguing for Motsoeneng‚ told Cassim that he has no jurisdiction to chair the disciplinary hearing because the comments Motsoeneng is being charged with having made fall under protected disclosure.

"This whole process that you have been instructed to proceed with‚ will simply be before that person simply for the reason that the employee alleges that utterances are protected public disclosures‚" argued Bester.

"This is an allegation by an employee regarding the employer and therefore it should go to the arbitrator [and] I am informed that this referral has been lodged with the CCMA‚" he said.

Protected public disclosure is usually used as a defence in which employees say they were wrongfully charged or dismissed for exposing corruption.

The Protected Public Disclosure Act of 2000 was created to safeguard employees who expose criminal activity‚ or where unfair discrimination has taken place.

Advocate Anton Myburgh‚ representing the SABC‚ argued that there was no need for this matter to be referred to the CCMA.

"The disciplinary hearing relating to those charges is not a reprisal for making a protected disclosure and therefore in that sense‚ there is no reason for those charges to be dealt with by the CCMA.

"There is absolutely no chance of Mr Motsoeneng to be able to convince a CCMA commissioner that this is a protected disclosure‚" said Myburgh.

In his ruling‚ Cassim said this application must fail and the disciplinary hearing must proceed.

"In my respective view‚ none of those allegations fall within paragraph B or C of the disclosure. I am not satisfied that the test of bona fides is contemplated in the inquiry before me‚ namely‚ as a result of an occupational detriment‚ that this employee is subjected to any disciplinary action.

"In my view‚ this application must fail [and] I'm deliberately refraining from saying more than is necessary about bona fides because I don't want it to impact on the ultimate issues which I have to decide on credibility‚" added Cassim.

Motsoeneng is facing charges of bringing the SABC into disrepute following a lengthy and bizarre media conference he held in April.

In the media conference‚ he railed against the SABC board for planning to scrap the 90% local music policy he had implemented and also took a swipe at interim board member Krish Naidoo‚ whom he accused of "selling out".