Cyril puts the blame on Zuma for rating downgrades 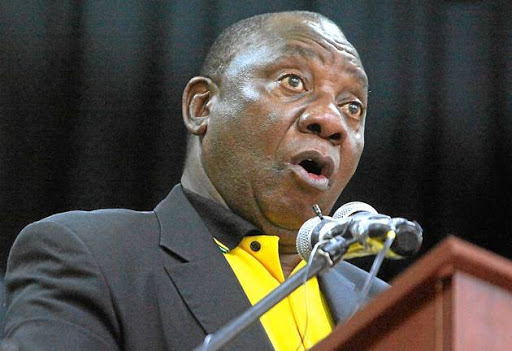 Without mentioning the name of the president‚ Ramaphosa told the Cosatu central committee meeting that National Treasury‚ business and civil society’s efforts to grow the economy had been dealt a “big blow”‚ telling delegates “we know what sparked that off”.

“Our efforts to grow the economy have been dealt a big blow by the recent decision by the ratings agencies to downgrade us and we know what sparked that off.

It is therefore critical that we must marshal all our resources and direct all our focus to ensure that our sovereign credit rating does not suffer any further downgrade and it is critical that we work together – and we have been doing so for the past 18 months – to address the immediate obstacles that stand in the way of growing our economy‚” said Ramaphosa.

Fitch Ratings‚ the second agency to downgrade South Africa to junk status‚ announced in April that it took the decision to downgrade the country’s unsecured foreign-currency and local-currency bonds to non-investment grade following the firing of finance minister Pravin Gordhan and his deputy‚ Mcebisi Jonas‚ arguing that this would likely change the direction of the country’s economic policy.

Fitch further said it did not believe new finance minister Malusi Gigaba’s pledge not to change fiscal policy and stick to consolidation‚ adding that “following the government reshuffle‚ fiscal consolidation will be less of a priority given the president's focus on 'radical socio-economic transformation'.

Ramaphosa‚ along with ANC secretary general Gwede Mantashe and treasurer Dr Zweli Mkhize‚ publicly spoke out against Zuma’s cabinet reshuffle‚ saying they were not consulted but merely presented with a list of changes whose origins they had no knowledge of.

Ramaphosa put further pressure on Zuma to institute a judicial inquiry‚ saying it was his hope the decision of the ANC national executive committee (NEC) to order a high-level probe into state capture allegations would actually be acted upon‚ adding that anyone implicated - “regardless of whatever quarter they may come from” - should submit to the process.

He argued that this was the perfect platform for those implicated to clear their names. Zuma‚ heavily implicated in state capture allegations‚ is the only individual endowed with powers to order a judicial commission of inquiry as head of state.

Ramaphosa’s insistence on the inquiry comes as Zuma has filed court papers to appeal against the remedial action stipulated by former public protector Thuli Madonsela in her State of Capture report.

In the report Madonsela said the president must institute a judicial commission of inquiry headed by a judge selected by Chief Justice Mogoeng Mogoeng "who shall provide one name to the president".

In court‚ Zuma is set to argue that he cannot be instructed to initiate such an inquiry.

“One of the reasons why I support this decision‚ comrades‚ is because we want people to clear their names. We want the truth to free us. We want the ANC to return to its core business.

The ANC must go back to what it was formed for. We must stop fighting side-struggles and fighting one another because this thing makes us fight each other. We are fighting for positions. We are fighting for resources. All of these things are happening because of this elephant in the room‚” Ramaphosa said.

He added: “And we hope and pray and trust that this decision is indeed going to be taken that the commission must be established‚ come what may.

It is also important that the terms of reference of this commission allow for a thorough in-depth examination of the extent of undue influence from whatever quarter on the institutions of state.

Ramaphosa‚ not Zuma‚ delivered the ANC’s message of support to the Cosatu meeting after the federation banned the president from addressing any of its gatherings.

Ramaphosa told Cosatu delegates that a political council meeting would be convened “in a few days” to iron out any differences between the ANC‚ Cosatu and the SA Communist Party.