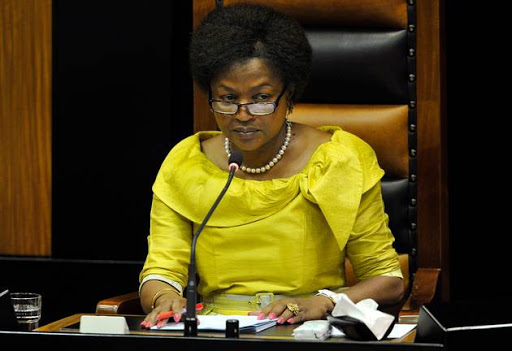 National Assembly Speaker Baleka Mbete criticised opposition parties for taking her to courts‚ arguing parliament has sufficient mechanisms in place for politicians to settle their differences.

Presenting the spending and policy priorities of Parliament for the 2017/18 financial year‚ Mbete said there was no need for parties to always involve the courts in political battles unfolding at the national legislature as this tempted the courts to encroach on the constitutionally enshrined doctrine of the separation of powers among the three arms of state.

Mbete said parliament had numerous structures in place that MPs could use as the national legislature's platforms to settle political differences.

"As parliamentarians‚ we have a responsibility to find solutions to the challenges facing our people. But we have to do so in a manner that acts as an example to the people we represent.

"With structures such as the Rules Committee‚ Chief Whips Forum‚ and the Committee of Chairpersons‚ we are well placed to meaningfully resolve disagreements and effectively execute our mandate without inviting the courts to encroach on our constitutionally protected terrain.

The Speaker and several opposition parties such as the DA and the EFF have been embroiled in several court battles after they had failed to resolve their political clashes in parliament‚ with the Nkandla judgment being the heaviest loss suffered by the National Assembly last year.

Mbete is also currently cited in a Constitutional Court case brought by the UDM after she declined their request for her to grant a secret ballot in the latest motion of no confidence in President Jacob Zuma's leadership.

But DA deputy chief whip Mike Waters said political parties would not have to resort to approaching the courts if Mbete did her job in an impartial manner.

"Well‚ Madame Speaker if parliament did it's job in a upholding the constitution properly‚ there would be no need for parties such as the DA to seek justice from our courts."

Displaying a copy of the constitution‚ Waters continued: "If ANC members on this side of the house actually read this document‚ and they did it against all odds‚ we would not have to go to court."

ANC Chief Whip Jackson Mthembu reiterated that his party's MPs would not vote in favour of an opposition sponsored motion of no confidence in Zuma‚ whether by secret ballot or not.

"I will not vote with any other party under the disguise of a so-called conscience vote."