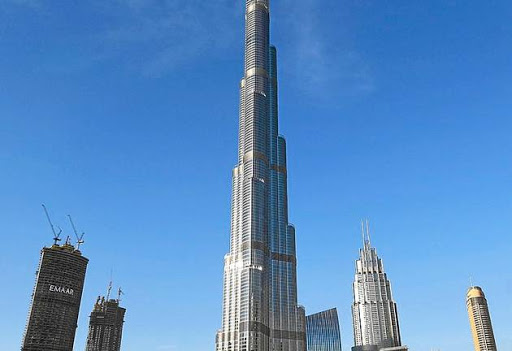 TOP OF THE WORLD: The Burj Khalifa, where Duduzane Zuma has bought a flat, soars above Dubai.
Image: TOM DULAT/GETTY IMAGES

President Jacob Zuma's son Duduzane, a shareholder in many Gupta-owned companies, bought an apartment worth nearly R18-million in the Burj Khalifa skyscraper - at 828.8m the tallest structure in the world - in Dubai two years ago.

Leaked e-mails show that Dudu-zane bought the property with substantial assistance from the Guptas and their associates in late 2015. The transaction came only months before a letter was circulated in which the Zumas appeared to be seeking residency in the United Arab Emirates, leaked e-mails show.

At the weekend the Sunday Times revealed what appears to be a plan to relocate Jacob Zuma and his family to the UAE. This included a letter prepared for Jacob Zuma requesting residency in Dubai. At the weekend, as he faced calls for him to stand down as president, Zuma denied that the letter had been written and that he planned to move to Dubai.

In January last year two draft letters circulated between Tony Gupta, Ashu Chawla, CEO of Gupta company Sahara, and Duduzane with the subject lines: "JZ letter to Crown Prince AUH" and "JZ letter to Sheikh Mohammed". In the letters, prepared for Zuma, he appeared to signal an intention to make Dubai his "second home".

Leaked e-mails show that Duduzane, through one of the companies he co-owns with the Guptas, Wens Holdings Ltd, registered in Dubai, bought an apartment in Burj Khalifa worth 5million United Arab Emirates dirham, equivalent to R18-million.

Duduzane has not responded to SMSes from The Times or returned phone calls.

"Please find attached a copy of the signed contract for the Burj Khalifa apartment. Following on from last week's and yesterday's correspondences, please confirm when the 10% deposit shall be lodged via managers cheque or directly into the conveyancers escrow account," said Lewis in an e-mail to Ragavan.

Lewis has since left Knight Frank and could not be reached for comment.

It is not known why Ragavan was involved in the transaction but all correspondence appears to have been routed through her.

Lewis also told Tony Gupta in an e-mail that all the paperwork for the property, apartment 6011, should be ready by the time Duduzane landed in Dubai.

"I am now pushing for the buyers to sort giving POA [power of attorney] to their lawyer. This has been agreed but the papers need to be sorted. Should be done by the time Duduzane arrives," said Lewis in October 2015.

Tony Gupta then sent some details of the contract to business associate Salim Essa to pass on to their legal consultants. By November Lewis forwarded a price tag for the flat to Ragavan.

"Going forward, will Duduzane attend or appoint a POA to his company?" asked Lewis in one of the e-mails. Duduzane apparently decided on giving power of attorney and registered the property in the name of Wens Holdings.

By December 2015 Ragavan had confirmed to Lewis that Duduzane was in Dubai to complete the transaction.

Documents show Duduzane completed the transaction with his initials and signature in December on behalf of Wens Holdings.

Gupta attorney Gert van der Merwe said he would be meeting the family later yesterday and only then be able to provide comment.