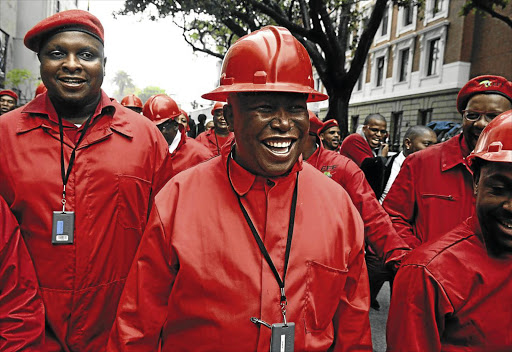 EFF sources say some in the party want Floyd Shivambu, left, to take over from Julius Malema, who is under fire over the handling of party finances.
Image: TREVOR SAMSON

On Friday Judge Tati Makgoka dismissed the application by Sars for leave to appeal a 2016 judgment that partly favoured Malema.

Sars wanted the High Court in Pretoria to rule that former judge Mabel Jansen had erred in her ruling that a court should hear oral evidence on Malema's insistence that the revenue service reached a compromise with him. In the application Malema brought before court in 2015‚ he argued that Sars had reached a compromise with him to resolve his tax problems and sought an order declaring it binding.

The compromise‚ apparently reached in May 2014‚ would see Malema paying off a part of his tax debt of more than R18.1 million.

But Sars subsequently informed Malema on February 5 2015 that it was not bound to the agreement because he had allegedly failed to make a full and frank disclosure.

Sars argued before Makgoka that Jansen should have ruled that the revenue service was not bound to the agreement.

But Makgoka agreed with Jansen’s ruling‚ that a court hearing is the best shot to resolve the impasse.

“Whether [Malema's] or [Sars's] interpretation of the compromise agreement is correct‚ cross-examination in respect of the parties’ knowledge of the facts and the circumstances attendant upon the compromise being entered into will bring clarity to matters of great importance to all the parties‚” Makgoka said in his judgment.

“Cross-examination may even demonstrate that Sars would‚ in any event‚ have entered into the compromise agreement had it been aware of all the facts which Sars contends the applicant did not disclose or disclosed inaccurately or incompletely – or prove the exact opposite.”

Although he saw no prospects for Sars's application to succeed in another court‚ Makgoka added that granting an appeal would not lead to a just and prompt resolution of the dispute.

He also ordered Sars to pay legal costs of counsel in the matter. “In all circumstances‚ I conclude that there are no compelling reasons why the appeal should be heard. It is not in the interests of justice to do so.

“In the result the application for leave to appeal falls to fail. With regard to costs‚ both parties have employed two counsels throughout‚ including in this application. Costs of two counsels are therefore warranted‚” said Makgoka.

Malema's lawyer‚ Tumi Mokoena‚ said they welcomed Makgoka's ruling. “It means that the process will continue as the judge (Jansen) had directed in the first place‚” he said.

“Obviously Sars can still appeal this judgment‚ but we're very happy with it. We've always maintained there's no reason to appeal the court's judgment

Malema will be expected to testify when the matter is finally heard.