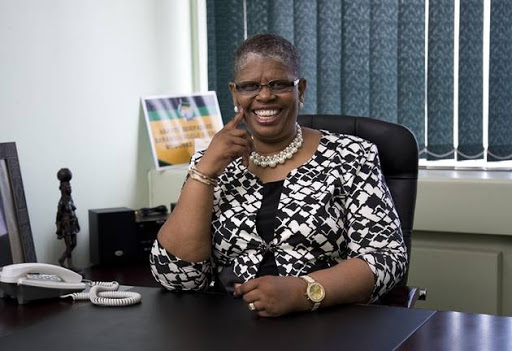 Durban Mayor Zandile Gumede is at the heart of a damning internal council investigation into how the city's police wasted R4-million to hire more than 50 top-end vehicles.

Of the fleet‚ eight cars – including a Toyota Fortuner and a BMW 320 for use as escort vehicles – were “allocated” for her protection while she was the ANC's mayoral candidate ahead of the August local government elections.

At the time‚ Gumede sat on the powerful decision-making executive committee and was chair of the health‚ safety and social services committee - meaning that the Metro Police often fell under her ambit. She was also the ANC's eThekwini regional chair.

The report‚ which was leaked to TMG Digital and which slated officials and slammed them for using Metro Police vehicles for the security of unnamed municipal office-bearers‚ it found that the cars were “never used for the Mayor’s protection”. However‚ Zwakele Mncwango‚ the leader of the DA in KwaZulu-Natal and in the eThekwini caucus‚ was adamant that Gumede had benefited - and called for an independent probe into the allegations to dig out the truth.

The report into "multiple irregularities" in the hiring of vehicles by the council's police force‚ compiled by the internal Audit and Risk Assurance Service‚ was part of a review of the city’s fleet and how thousands of vehicles belonging to the municipality are put to use. Investigators found that officials had “lied” to procure the cars and had even invoked Gumede’s name to ensure that the deal was pushed through.

As part of the probe‚ auditors honed in on a set of cars hired for Metro Police use as the force established a “Crowd Management Unit” to curb burgeoning levels of civil unrest within the city limits ahead of local government elections last year. The unrest included service delivery protests.

While the police force was in the process of establishing their own riot unit‚ a list of vehicles required was submitted. This list included a water cannon and armoured Nyalas. However‚ auditors found what eventually arrived was vastly different.

“There is a clear difference without reasons between the motivated requirements for the MOT [Multi-operational team] and what was subsequently ordered‚” the report reads.

Investigations revealed that of the 51 vehicles which were hired‚ eight had been allocated to the “Candidate Mayor”‚ namely:

The report states that there was evidence of vehicles being used for the protection of the mayor and other council office bearers‚ "which is not a function of the Metro Police". While it does not name any of the officials‚ the investigators found this to be "in violation of the South African Police Service Act of 1998".

However‚ the report appears to absolve Gumede of blame in the multi-million rand saga.

“An estimated total of eight vehicles supposedly requested to only provide security and VIP protection to the Mayor but were never used for the Mayor’s protection‚" it reads.

Not only this‚ but it also claims that officials: - used Gumede's name to breach supply chain management protocols; - threatened other officials to breach council regulations "while dropping the mayor's name as if such instructions were given [by Gumede]"; and - used some of the vehicles for their own "personal use".

But Mncwango is not convinced. He told TMG Digital that he confronted Gumede about her alleged use of Metro Police vehicles for her own security.

“Although I cannot be specific as to which ones [she has used]‚ but even now if you come to City Hall you will see unbranded [Volkswagen] GTIs among her convoy. I raised the issue at a council meeting in May‚ asking why she was sitting on such a report if she was serious about eradicating irregular expenditure‚” he said.

Mncwango‚ who has misgivings with some of the findings in the report‚ called for an independent investigation.

“This one is only based on Metro Police. However‚ the key question is: was it necessary for her to have so much security? Her continual withholding of the report shows dishonesty and her perpetuation of irregular expenditure. It’s our responsibility to hold officials and councillors to account and to protect public funds from wastage. Why‚ then‚ is she hiding the report?” he said.

Over and above the murky mayoral cavalcade‚ the report highlighted a raft of transgressions of normal procurement processes and an alleged abuse of the hired cars.

“The contract value was an estimated R4 086 055.26 for a period of six months and most of the vehicles were used beyond six months‚" it found.

Auditors also found that during this period of hire‚ the Metro Police racked up a petrol bill of nearly R1-million.

“In view of the findings it appears that the hiring of vehicles for Metro Police by City Fleet was marked by multiple irregularities including dishonesty and blatant abuse of authority to override controls. All payments made are unauthorised and irregular since the contract cited is invalid. The hired vehicles have allegedly been used by police members for their own businesses or private use. Some have been used to travel as far as Johannesburg outside of council use‚” it reads.

Auditors recommended that Metro Police officers should be prohibited from providing security for councillors and key officials.

Gumede‚ the Metro Police and the eThekwini Municipality were approached for comment.

Municipal spokesperson Tozi Mthethwa responded‚ saying: “The issues raised are being investigated. The municipality is not in a position to comment on a pending investigation.”