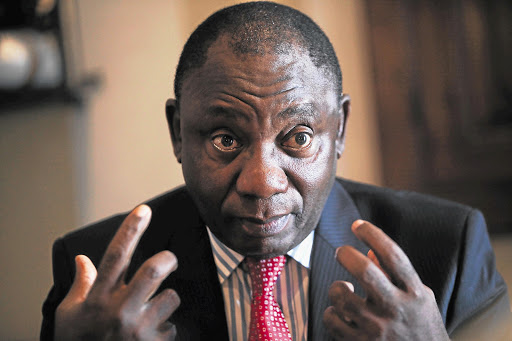 Deputy President Cyril Ramaphosa says true radical economic transformation must be implemented speedily to address the imbalances of the past.

He was speaking at the Gordon Institute of Business Science on Tuesday under the title "Unpacking radical economic transformation".

"What we need to do is to go beyond slogans and go to the heart of the matter and look at what needs to be done to redress the imbalances of the past. Therefore we must focus on the real substance of radical economic transformation and the steps that we need to take‚" Ramaphosa said.

The deputy president said generational asset transmission that takes place in every household was destroyed by dispossession and had a knock on effect on skills transfer from generation to generation.

President Jacob Zuma believes the question of land in South Africa must be resolved within the realm of the country's laws and constitution.Zuma ...
News
5 years ago

"People who were removed from their land found themselves in the diaspora and they therefore lost the capability and the knowledge to work the land‚ and one of the results of that today is that as much as people are given land that was taken away from them over many years‚ they return to it but don't have the skills‚" Ramaphosa said.

He however emphasised that radical economic transformation was not a new discussion and that it should not be feared and therefore should be taken head on. He said the whole country must unite to ensure that this is achieved.

Ramaphosa said this was also not a break from existing policies. He said this was accelerated implementation of the long standing policies of the ANC and that these talks would be intensified at the party's policy conference starting on June 29.

The deputy president also lashed out at politicians who misused the term "radical economic transformation" to proclaim measures that were intended to cement their "radical" credentials rather than actually achieve meaningful improvement in the lives of the poor.

Talk of radical economic transformation has dominated the national discourse over the past couple of months.