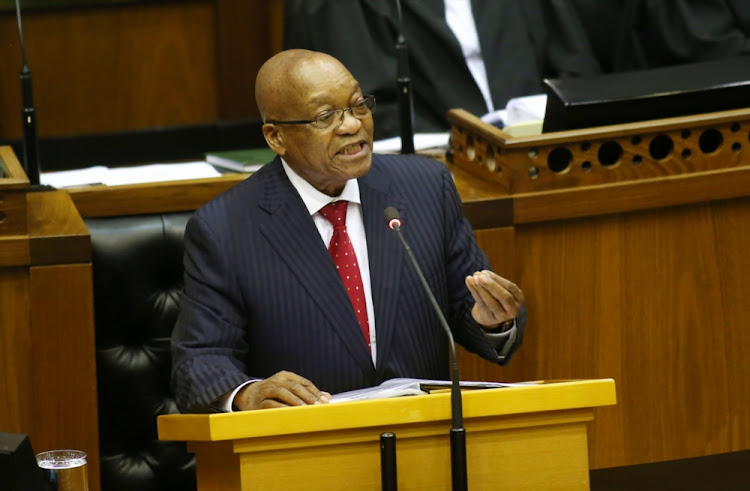 Zuma on Thursday announced the establishment of a judicial commission of inquiry into state capture‚ in which he has been repeatedly implicated‚ shortly after the Constitutional Court ruled that there was no impediment to a secret parliamentary ballot on his future.

The Constitutional Court decision opened the door to a secret ballot in a no-confidence motion.

The announcement of the commission of inquiry follows weeks of continuous reporting by The Times and the Sunday Times concerning the hundreds of thousands of leaked Gupta e-mails‚ which have shed new light on the scope and scale of state capture.

The court’s judgment on an application by the United Democratic Movement imperils Zuma’s presidency further.

The court made it clear that Speaker of Parliament Baleka Mbete was mistaken when she claimed that she did not have the power to authorise a secret ballot. It outlined the considerations Mbete would have to take into account in deciding on the ballot.

A statement from parliament shortly after the judgment was delivered appeared to indicate that a secret ballot is on the cards.

“Now that the court has clarified that the Speaker has the powers under the constitution to conduct motions of no confidence by way of a secret ballot‚ she will‚ accordingly‚ ensure the judgment is given effect‚” the statement said.

Opposition parties hailed the court’s decision. The DA said it would move to have the motion of no-confidence debated.

Opposition parties have celebrated the Constitutional Court ruling that National Assembly Speaker Baleka Mbete has the constitutional power to ...
Politics
5 years ago

UDM leader Bantu Holomisa said: “The UDM is vindicated because we asked the Speaker to use her prerogative‚ but she put the interests of her party ahead of parliament ... Those MPs are free to vote and follow their conscience.”

COPE leader Mosiuoa Lekota said: “The court has made it clear that those of us who are elected‚ once elected and having taken an oath of office‚ owe it to the people of South Africa as a whole that no political party can compel a member of parliament to vote against their conscience and against their judgment.”

Political analyst Ralph Mathekga said Mbete would have to give “sound reasoning” for her decision on a secret ballot.

“This constrains her space to manoeuvre‚ making it very difficult for her not to allow a secret vote‚” Mathekga said.

National Assembly Speaker Baleka Mbete will have to make a decision on whether the vote on the motion of no confidence in President Jacob Zuma should ...
Politics
5 years ago

Political analyst Dumisani Hlophe said Zuma’s judicial commission announcement had more to do with pressure from within the ANC than with the Constitutional Court’s ruling.

“There has been an increase in pressure from Luthuli House [ANC national headquarters]. When it became the decision of the ANC national executive committee that the judicial commission be formed‚ he [Zuma] became very constrained in his defence. The least that he could do was appoint this commission‚” said Hlophe.

He said the terms of reference of the commission would be critical.

Former public protector Thuli Madonsela in her State of Capture report recommended that the chief justice‚ and not Zuma‚ appoint a judge to preside over the inquiry because Zuma was implicated in her report.

Hlophe said other signs of the ANC’s national executive committee flexing its muscles had been the rescinding of the decision to reappoint Brian Molefe as Eskom CEO‚ and the challenge to the controversial mining charter released by Mineral Resources Minister Mosebenzi Zwane.

The Hawks appeared to be probing state capture and parliament was taking action too.

“They [the ANC] have said this is what will clear people’s names. Cyril Ramaphosa was in Parliament hammering this position that people will be given an opportunity to clear their names‚” he said.

“The only reason that he is not going is that it would kill the party. They [ANC] are basically hanging on to him until the elective conference and thereafter they are planning to recall him … Right now they are just scared because the ANC would just implode [if Zuma is recalled]‚” he said.

Here are the 10 best quotes from the Constitutional Court ruling which found that the Speaker of National Assembly has the power to authorise a ...
Politics
5 years ago

President Jacob Zuma has defended his son Duduzane's business relationship with the Guptas‚ telling opposition MPs they were being "unfair" for ...
Politics
5 years ago