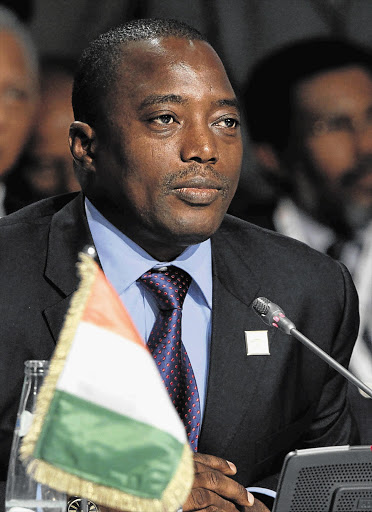 President Jacob Zuma on Sunday congratulated his counterpart President Joseph Kabila on what he said was progress made in the Democratic Republic of the Congo.

“We gather here at a time when your country is going through a political transition following the December 2016 political agreement. This agreement charted a process that should lead to the next elections. We congratulate you‚ Mr President‚ on the progress achieved thus far and the manner with which you have handled the process‚” Zuma said.

This was contradictory to what Jean Bwasa‚ a human rights activist and spokesperson for the Congolese community living in South Africa had earlier told TimesLIVE he was hoping to hear from Zuma.

“President Zuma should act as ‘an uncle figure’ and advise Kabila to hand over power‚” said Bwasa.

He was one of a handful of DRC citizens who had gathered outside the Sefako Makgatho presidential guesthouse in protest as a bi-national commission (BNC) meeting was held between delegates of the two countries.

Bwasa explained that as stated in the DRC constitution‚ Kabila should have organised fresh elections in December last year in preparation for his successor.

This did not happen. Instead‚ negotiations about the future of the country dragged on until December 31 when a deal – stating that Kabila will only step down after elections are held by the end of 2017- was brokered.

No official date‚ has however been set for the elections.

Zuma seemed oblivious to the anti-Kabila protests happening outside the premises‚ even as protesters used a hailer to declare that Kabila was an illegitimate president who was clinging on to power.

“The DRC is now politically stable and the security situation has improved. Where there are still challenges‚ the government of the DRC‚ with the assistance of the region‚ continent and international community‚ is addressing those. In this regard‚ we encourage you‚ Mr President‚ and your government to continue on this path‚” Zuma said.

He called on the people of the DRC to negotiate and hold dialogue about their future and pledged South Africa’s support for the central African nation.

The meeting between the two heads of state seemingly cemented their relations‚ with plans being put in place to bolster trade and investment.

But Esale-Prince Mpinda of the National Council of the Congolese for Development in SA said the meeting between Zuma and Kabila would be fruitless.

“When the DRC officially has a new government‚ whatever agreements are reached between Zuma and Kabila would be regarded void‚” Mpinda said.

”It is a private meeting and the Congolese government tomorrow will not consider any signature which Kabila puts down‚” he added.