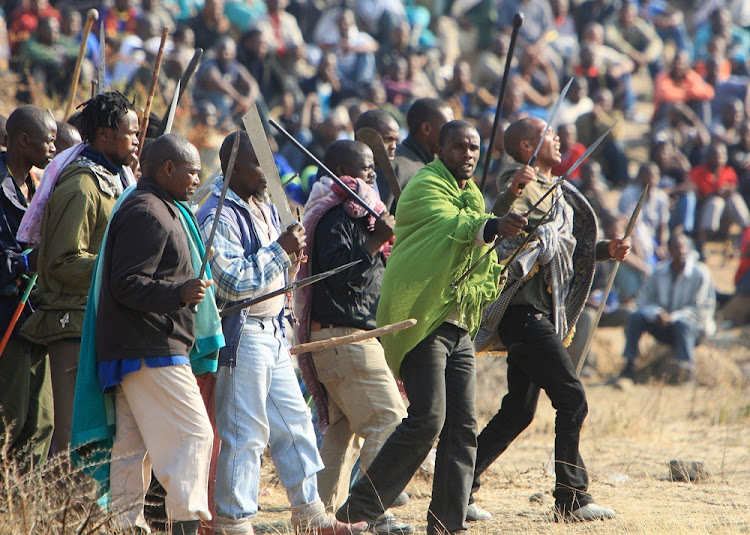 Mgcineni Noki aka 'The Man in the Green Blanket' became the face of the deadly platinum wage strike at Marikana five years ago.
Image: KATHERINE MUICK-MERE / Sunday Times

Association of Mineworkers and Construction Union (Amcu) president Joseph Mathunjwa has handed over a house to the family of the late Mgcineni Noki‚ who became the face of the deadly platinum wage strike at Marikana five years ago.

The house for the "Man in the Green Blanket" is at eMqanduli.

Noki‚ 30‚ and his green blanket featured prominently during the protests and police shooting of the Lonmin strikers in 2012.

Amcu said "Mambush is a part of South African history and his name will live on forever."

"Mambush commanded the force of the people."

Mathunjwa visited the family at their rural home in Thwalikhulu village between Mqanduli and Coffee Bay in August 2016‚ at a sod-turning ceremony for the home. Mathunjwa said it would be a three-room house with a lounge‚ dining hall and flush toilet. He said a septic tank would be installed to enable the toilet to flush.

Altogether‚ he promised to build 34 homes‚ one for each of the miners who died at Marikana‚ through a trust set up by the union.

At the weekend‚ he delivered the first of the homes.

All the resources to built the house were sourced locally in the community‚ the union said‚ noting "The burglar gates were built by a disabled man".

Mathunjwa encouraged the community to stay in school and pursue educational opportunities‚ saying it was the best way to combat unemployment and social grant dependency.

"No politician will liberate you. You need to liberate yourself‚" he said in remarks tweeted by the Amcu twitter handle. "We need to be liberated in the mind to go forward."