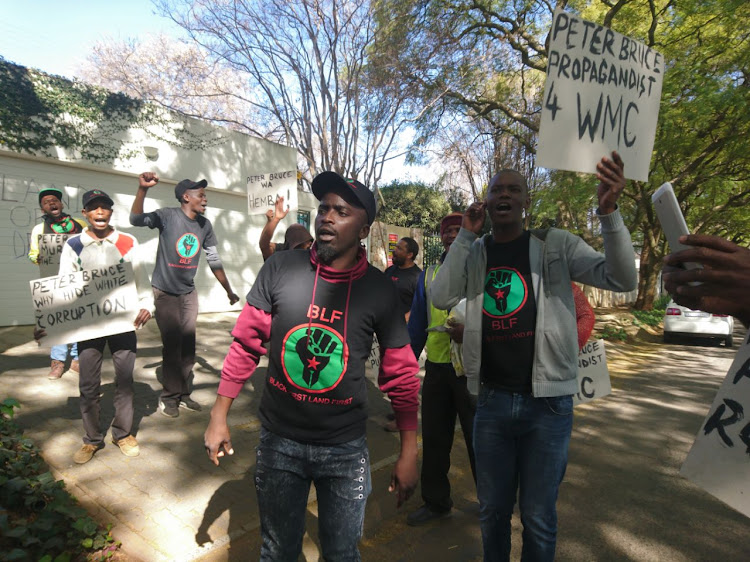 Group editor-at-large Peter Bruce and Business Day editor Tim Cohen were assaulted on Thursday by the Gupta-linked BLF movement‚ which was unhappy about a column that appeared in Business Day.
Image: Abigail Javier

Group editor-at-large Peter Bruce and Business Day editor Tim Cohen were assaulted on Thursday by the Gupta-linked BLF movement‚ which was unhappy about a column that appeared in Business Day.

The Black First Land First movement picketed outside the home of Tiso Blackstar editor-at-large Peter Bruce on Thursday. The protesters demanded that he start writing about the “wrongdoing” of white monopoly capital and said they would occupy his home because it was built on stolen land. Subscribe to TimesLIVE here: https://www.youtube.com/user/TimesLive

BLF protesters‚ which threatened Bruce at his home in Parkview‚ Johannesburg‚ demanded that he start writing about the "wrongdoing" of white monopoly capital and not depict the black race as people associated with corruption.

Cohen‚ who has been the editor of the newspaper since February 2016‚ was accosted on his arrival at Bruce's home shortly after hearing of the protest.

"SANEF condemns unreservedly the intimidation and threats against journalist Peter Bruce [and Tim Cohen]. Media freedom is protected by the constitution and Mr Bruce has exercised his right to express himself. We also condemn the invasion of Mr Bruce's personal life as part of a cowardly act to silence him. We encourage Mr Bruce to report the perpetrators to the police. Journalism is not a crime. State capture is‚" said Sanef director Chris Kabwato.

Thandiswa Yaphi‚ who is the treasurer of BLF‚ threw in a cheap shot at Cohen's chin.

Tiso Blackstar also expressed its outrage against the attack on the journalists.

"We are appalled at the attempted intimidation of Peter Bruce. It is an outright threat to journalism that we shouldn’t laugh off as a handful of lunatics making noise but rather part of a concerted campaign to intimidate that should be condemned in the strongest possible terms by anyone who supports the freedom of the press‚" Tiso Blackstar said in a statement.

"As a media company in the forefront of exposing state capture and‚ most recently‚ the revelations from Gupta Emails leak‚ we will not be bowed by these bullying tactics"‚" the media group added.

A group of about 20 BLF members had gathered outside Bruce's home‚ holding placards. They wrote "land or death" on his garage roller door and hurled insults at him. They also told him to pack his bags and go back to Europe‚ saying they want to occupy his home‚ which they claimed has been built on stolen land.

The former editor-in-chief of Business Day and Financial Mail said he had no doubt that the protest could be linked to his opinion piece in Business Day‚ in which he wrote that he was targeted by the Gupta family for writing articles about them.

"He is selective when he writes his opinion piece. He does not write what is truthful‚ factual and he doesn't investigate. He just writes what in his racist mind and we don't accept that as black people and also as the BFLF movement‚" said Thandiswa Yaphi‚ treasurer of the organisation.

"We are saying there are so many stories out there that he should be running that have potential and are good for the nation. He's not writing about the mining charter‚ and the Absa‚ he's only writing about thugs that implicate black people as being corrupt and pushing a narrative that black people are the ones that are corrupting this country while we know that people like Johann Rupert (business tycoon)‚ Maria Ramos (Absa CEO)‚" said Yaphi.

This was in reference to Public Protector Busisiwe Mkhwebane's recommendations that government take legal action to recover misappropriated public funds unlawfully given to Absa Bank in the amount of R1.125bn.

Mkhwebane made this finding concerning Absa on its role in the purchase of Bankorp in 1992.

In January‚ a leaked provisional report from the Public Protector’s office recommended that Absa pay R2.25-billion to the fiscus for an unlawful apartheid-era bank bailout.

The National Press Club added its voice to those condemning the attacks on the two journalists.

Jos Charle‚ chairperson of the National Press Club‚ said journalists should be allowed to report the news without any fear‚ intimidation or harassment.

“It is unacceptable that journalists are intimated at their homes. We cannot sit back and watch our colleagues being abused.”