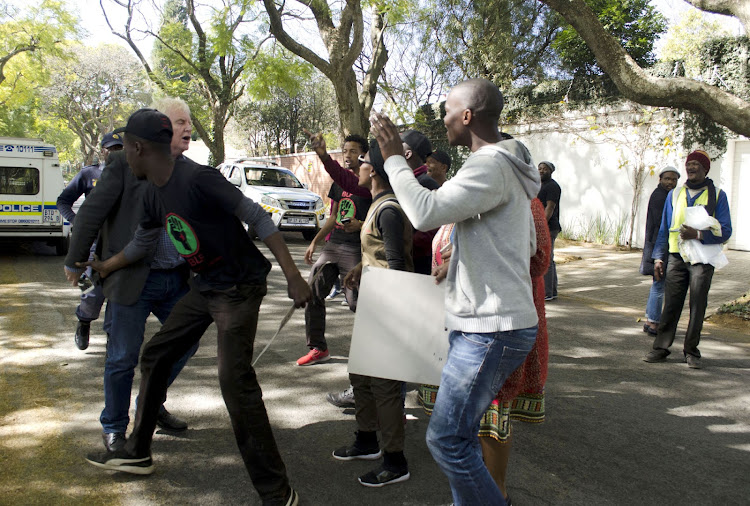 Business Day editor Tim Cohen was assaulted by the Black First Land First movement on Thursday‚ the second senior journalist to be targeted by the Gupta-linked BLF in a day.

Cohen‚ who has been the editor of the paper since February 2016‚ was manhandled by a group of BLF protesters outside Peter Bruce's house in Parkview‚ Johannesburg. Bruce is the editor-at-large of Tiso Blackstar‚ formerly Times Media‚ which owns TimesLIVE‚ and a former editor-in-chief of Business Day and Financial Mail.

Cohen was accosted on his arrival at the home‚ after hearing of the protest against Bruce.

Thandiswa Yaphi‚ who is the treasurer of BLF‚ threw in a cheap shot at Cohen's chin.

A group of protesters gathered outside the home of well-known journalist Peter Bruce on Thursday.
Politics
5 years ago

"My intention was to go to check if Peter Bruce was alright because he's the columnist for Business Day. Upon my arrival‚ I innocently took out my cellphone to take a photograph of the protesters and they just went nuts.

"The police separated us and then Peter came out so it was clear that he was okay and I decided not to inflame the situation so I left‚" said Cohen.

Cohen said the situation was outrageous because Bruce's Thursday's column had only mentioned BLF leader Andile Mngxitama in passing.

A group of about 20 BFLF members had gathered outside his home‚ holding placards. They wrote “land or death” on his roller door and hurled insults at him. They also told him to pack his bags and go back to Europe‚ saying they want to occupy his home‚ which they claimed has been built on stolen land.

Bruce said he had no doubt that the protest could be linked to his opinion piece in Business Day‚ in which he wrote that he was targeted by the Gupta family for writing critical articles about them.