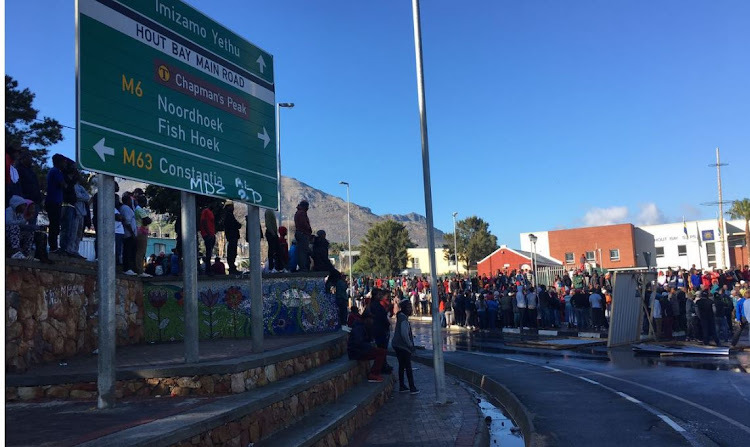 Protesters mass at the traffic circle at the entrance to Hout Bay on Monday morning.
Image: Esa Alexander

On Monday De Lille stood a few hundred metres from protesters at the Hout Bay township‚ who wanted to speak to her about better housing and service delivery. But De Lille left after being advised the situation was “too volatile”.

Her no-show sparked an angry reaction from the crowd‚ who marched to the entrance of the police station before being dispersed with stun grenades‚ rubber bullets and tear gas.

A 30-year-old man was shot in the chest as protests in Hout Bay turned violent on Monday.
News
4 years ago

Protests in Hout Bay intensified on Monday as disgruntled community members overturned vehicles and damaged a mobile kitchen. Officials were able to ...
News
4 years ago

Addressing the agitated crowd‚ city councillor Bheki Radebe said the mayor had received a police intelligence report that it would not be safe to meet protesters.

“She wants the community to send a few representatives to meet her at the Civic Centre because she has been told it is not safe for her here. Thereafter she will address the community.”

The protests began on Saturday when residents who had lost their homes in a March fire grew fed up with their city-provided temporary housing.

After the fire‚ the city council and the Imizamo Yethu community agreed to rebuild using a method known as super-blocking‚ which would allow for better movement and access‚ particularly in the event of emergencies.

But angry residents said the project‚ which was supposed to take three months‚ was overdue and conditions on the field where temporary structures were built were wet‚ cold and dangerous.

“We called it the Three Month Estate because that’s how long the mayor promised we would be there‚ but now it’s longer and we are still there‚” said Sithembiso Nadyo.

“It’s very cold‚ there is water running into the structures and we have to walk very far in the dark to the toilets.”

Earlier‚ protesters looted stores‚ barricaded roads and burnt tyres from about 4.30am. A 30-year-old man who was shot in the chest was taken to Victoria Hospital in Wynberg.

In a statement on Monday‚ De Lille said she had prioritised the problem and appealed with residents to meet with their leadership.

“The disruption in the community is now reaching dangerous levels but I remain completely willing to personally go and mediate with the community to get to the bottom of their issues‚ and to ensure that the City of Cape Town keeps to its end of the bargain regarding development in Imizamo Yethu‚” she said.