NEWS ANALYSIS: No 1 takes a stroll at Nasrec while his party discusses dangers it faces 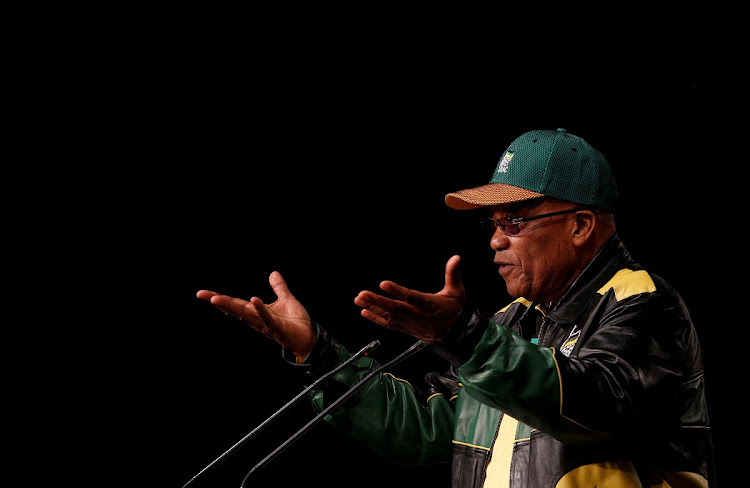 The ANC Women’s League’s bizarre inclusion of six men in its delegation to the party’s national policy conference‚ under way in Johannesburg this week‚ is so far unchallenged.

But President Jacob Zuma’s “walkabout” at the Nasrec conference centre on Monday also constituted a rather odd moment in South African politics.

The president’s inspection of the exhibition stands on the sidelines of the conference provided the rare opportunity for contact between the long-suffering media pack and No 1.

The conference of the ruling party is going so smoothly, it seems, that President Jacob Zuma had time on Monday to wander among statues of past party ...
Politics
5 years ago

Zuma strolled around a display of bronze statues of struggle heroes like the king of the jungle on the prowl while the press gaggle captured his every move. He stared some of the statues in the face while Chris Hani‚ Walter Sisulu‚ Nelson Mandela and Oliver Tambo stood frozen in time.

It would seem this was the type of struggle veteran the president preferred — lifeless and muted from criticising him.

The president clutched a cellphone in his hand throughout — perhaps a call or instructions were expected from individuals not at the conference.

At the day’s only media briefing‚ on strategy and tactics‚ the ANC head of political education‚ Nathi Mthethwa‚ said discussions at commissions convened at the conference focused on tackling dangers facing the party and correcting weaknesses that had led to the loss of electoral support.

Moves to have two deputy presidents in the ANC and to expand the party's top leadership structure to nine were dealt a blow at the policy conference ...
Politics
5 years ago

But asked whether there was concern about how a foreign family had managed to appropriate political power from the ANC‚ Mthethwa said the conference was not “a current affairs session”.

It seems state capture was the only taboo issue for Mthethwa. He was comfortable talking about global geopolitical events‚ including the elections in Europe.

There appears to be a growing consensus at the conference that what the ANC perceives as the enemy of "radical economic transformation" should be framed in less provocative language.

Mthethwa said that although it was a fallacy to say that the phenomenon of white monopoly capital did not exist in South Africa‚ there should not be aspirations to trade it for black monopoly capital. So their Bell Pottinger-sponsored narrative could be watered down to “monopoly capital” in the conference resolutions.

Another issue gaining traction is a constitutional change to allow for land redistribution without compensation. Delegates are in favour of working with other political parties such as the Economic Freedom Fighters and the Inkatha Freedom Party to secure the two-thirds majority necessary to amend the constitution.