President Jacob Zuma has thrown his weight behind a compromise solution to a bruising elective battle‚ saying the candidate who loses the ANC presidency should be elected the deputy president of the party.

In a frank closing address at the ANC's national policy conference‚ Zuma supported a call made by the ANC in KwaZulu-Natal that the person with the second most votes in the election for the ANC presidency should become the deputy president.

"If one wins let us not take the other one away. Let us make the other a deputy‚" Zuma said to some howling. His proposals did not immediately receive the nod from delegates but Zuma said this was the only solution to kill factionalism and slate politics in the party.

Zuma used his closing address to support a proposal that the ANC's constitution be amended so that there are two deputy presidents of the party.

"If needs be I can go province by province to motivate this‚" he said. Zuma argued that factionalism in the ANC was so rife that "it seems like two organisations in one". 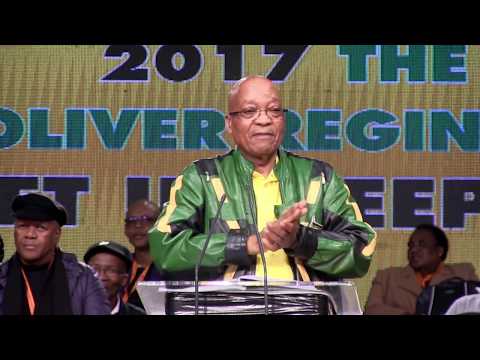 Zuma spoke at length about the bruising leadership battle that got him elected in the 2007 Polokwane conference‚ saying the ANC lost many good leaders because of factional fighting.

"When they lose‚ all of them are out... they get angry. It is a destructive system that does not help the ANC‚" Zuma said.

He said his proposed solutions to the leadership contest would help heal tensions in the movement.