Image: MOELETSI MABE STAND-OFF: Black First Land First members clash with #saveasouthafrica members outside the Gupta compound in Saxonwold, Johannesburg. BLF members argued that white people should not attack the family 'because white people own most of the companies on the JSE'. The group held up signs saying '#HandsOffZuma'Picture: MOELETSI MABE

Black First Land First (BLF) has raised a number of preliminary points in the urgent application by the South African National Editors Forum to interdict BLF from harassing‚ intimidating‚ assaulting and threatening journalists and editors over their reporting and analysis on state capture.

The organisation's preliminary points have to be heard first before the application by Sanef and 11 journalists for an interdict in the High Court in Johannesburg.

If the court agrees with the points raised by BLF‚ there would be no need to hear Sanef's application.

The first preliminary point raised by BLF was that Mahlatse Gallens‚ the Sanef chairperson who filed a founding application on behalf of Sanef‚ did not have authority to do so.

This was because the constitution of Sanef specified that a resolution must be taken by a Sanef meeting to bring the application.

BLF also said there was no resolution from a Sanef annual general meeting authorising Sanef to bring the application before court.

BLF said the other journalists who brought this application were not members of Sanef‚ whose constitution states that it must serve as a forum to promote its members' interests. 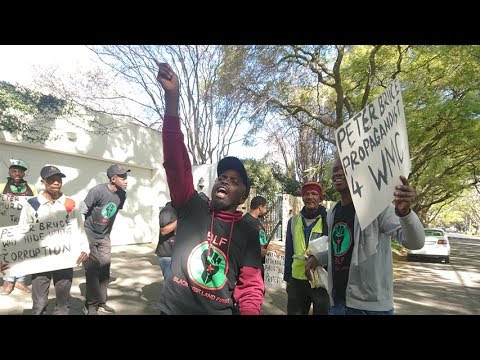 Last Thursday Business Day editor Tim Cohen was assaulted as he tried to take a picture of BLF supporters gathered outside Tiso Blackstar editor-at-large Peter Bruce's home in Johannesburg. Bruce had written an article on how a website had secretly taken photographs relating to his private life‚ indicating that he had been spied on. Tembeka Ngcukaitobi‚ for Sanef‚ said some of the reporters brought the application in their personal capacities.

Ngcukaitobi said analyst Karima Brown was physically assaulted and so was Cohen when they went to support Bruce at his home last Thursday.

Ngcukaitobi said Bruce's property had been defaced and people who wanted to visit him at his home were prevented from doing so by BLF members.