'You whites will lose everything,' Malema tells bankers 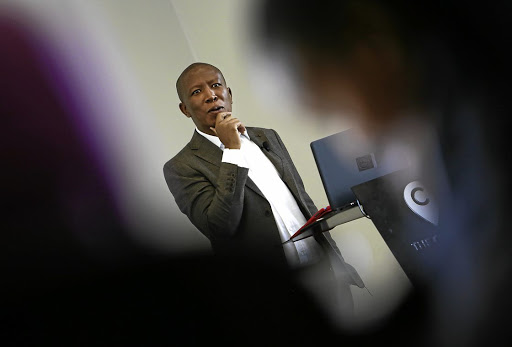 BIG ISSUES: EFF leader Julius Malema at the RMB Macro Forum, in Sandton yesterday. He said expropriation was inevitable but the debate was around compensation. 'We don't want to engage with it in a way that will put the economy into disaster' Picture: ALON SKUY

If white people can't see this, and if they don't help to solve the country's problems, they will end up "with nothing", he added.

Malema, who was accompanied by EFF deputy president Floyd Shivambu, told the delegates that white South Africans were economically superior to black South Africans, something they had achieved through apartheid, colonialism and illegal means.

He said failure to accept this was at the centre of South Africa's problems.

"The point we are making here is that success is associated with whiteness. A white minority continues to own and control 90% of South Africa's economy that is not in the hands of foreign investors and pension funds.

"These are the facts that I'm giving you in a comfortable situation without confrontation...

"You are actually sensitive to such information and discrediting anyone who says such things, and make them irrelevant, because you don't want to hear the truth," Malema told a room full of RMB employees and other financial sector stakeholders.

"You think you are owning now [and] you don't want to find a long-lasting solution to this crisis.

"You will lose everything."

Malema appeared in the regional court in Newcastle, KwaZulu-Natal, earlier this week for calling on EFF supporters last year to invade unoccupied land.

Malema is charged with incitement and with contravening the 1956 Riotous Assemblies Act, which he is challenging.