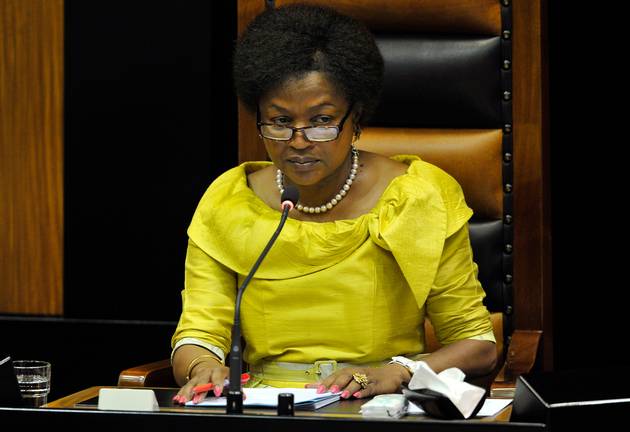 Opposition parties in Parliament have formally asked Speaker of the National Assembly Baleka Mbete to recuse herself from presiding over the upcoming debate on the motion of no confidence in President Jacob Zuma‚ saying it would be inappropriate for her to preside over it.

The request was made in a letter written by United Democratic Movement leader Bantu Holomisa on behalf of his party as well as the leaders of the African Christian Democratic Party‚ African People’s Convention‚ Congress of the People‚ Democratic Alliance‚ Economic Freedom Fighters and Inkatha Freedom Party.

Mbete has no business fiddling with the judiciary

As National Assembly speaker and ANC national chairman Baleka Mbete plants her flag in the sand for the ANC's top job in December, her comments in an ...
Ideas
4 years ago

Holomisa stated that the parties had met on July 13 and resolved that it would not be proper for Mbete to preside over the debate.

The parties based their argument on the following grounds: - Mbete was on record instructing African National Congress (ANC) Members of Parliament in the National Assembly to vote in favour of their President; - In the event of the success of the motion‚ Mbete was enjoined by the Constitution to act as President; and - She is also in the running for ANC President and by extension the President of the Country.

“Making matters worse is your recent attack on the judiciary. You have said that certain judges are biased against your party. Your action undermines your duty to act as liaison between Parliament‚ as an institution‚ and the other arms of State. It means that you still fail to separate your role as the head of the National Assembly and that of ANC Chairperson.

“All of the aforementioned demonstrate‚ beyond a reasonable doubt‚ that you are patently biased and therefore conflicted and compromised‚” the letter reads.

It added: “We also wish to remind you of the wise advice given by the Chief Justice Mogoeng Mogoeng‚ in the 22 June Constitutional Court’s judgement‚ He said the following about the power of those in public office: ‘They are therefore not to be used for the advancement of personal or sectarian interests. Amandla awethu‚ mannda ndiashu‚ maatla ke a rona or matimba ya hina (power belongs to us) and mayibuye iAfrika (restore Africa and its wealth) are much more than mere excitement-generating slogans.’

“We hope that you will to do the right thing in the interest of the Nation and recuse yourself from presiding over this debate.”