Hit on ANCYL's Magaqa can be traced back to Durban hostel: expert 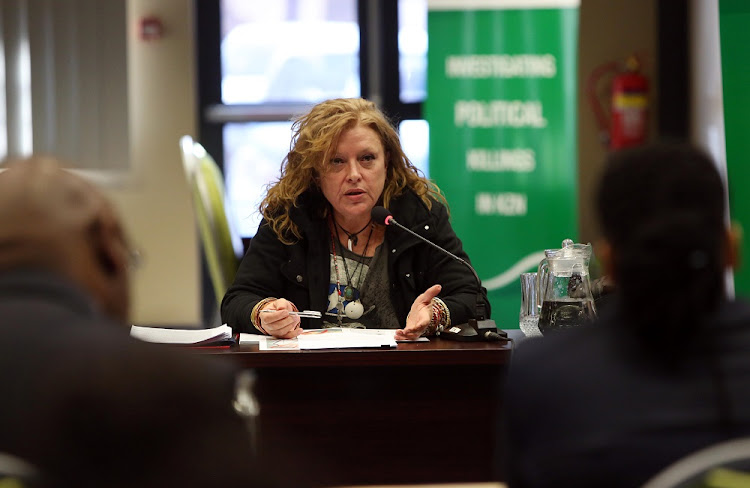 Expert Witness Vanessa Burger speaks to the Moerane Commision about her findings into the political killings in KZN, especially in Glebelands Hostel.
Image: JACKIE CLAUSEN

The recent spate of killings plaguing KwaZulu-Natal's volatile Umzimkhulu region - including the attempt on former ANCYL secretary-general Sindiso Magaqa's life last week - can all be traced back to Durban's notorious Glebelands Hostel‚ the Moerane Commission heard on Monday.

Body count on the rise in wave of shootings, killings of councillors in KwaZulu-Natal

This bombshell was dropped by expert witness Vanessa Burger of the Independent Community Activist for Human Rights and Social Justice advocacy group‚ speaking before the commission in Durban.

The commission is tasked with understanding the causes and possible solutions to ongoing political violence in KZN.

Under oath‚ Burger said that she had it on good authority that large amounts of money were recently collected in order to pay a hitman to carry out killings in Umzimkhulu. The amount was unspecified.

Evidence leader Bheki Manyathi asked Burger if she regarded the attempted murder of Magaqa last Thursday as one of those hits‚ to which Burger simply said‚ "Yes."

"The hitman was paid and he is still in Umzimkhulu. The three that were shot in Umzimkhulu [between April and last week] were killed by the same hitman‚" she said.

Burger said the weapon used was a state-issued R1 firearm.

The Hawks has established a task team to investigate the shooting of three KwaZulu-Natal ANC councillors in the Umzimkhulu area on Thurday evening.
Politics
4 years ago

Former ANCYL secretary-general Magaqa‚ now a councillor‚ and two of his colleagues‚ ward 11 councillor Nonsikelelo Mafa and ward 16 councillor Jabu Mzizi‚ were attacked by unknown gunmen‚ landing them in hospital. They became the fourth‚ fifth and sixth victims of violence in the area in recent months.

ANC regional deputy secretary and Umzimkhulu Municipality speaker Khaya Thobela was the first to be gunned down‚ shot on April 20 while arriving at his home in Mfundweni. He died in hospital three days later.

A special task team has been set up to investigate the series of murders and attempted murders.

Burger told the commission on Monday that when there is a big cash collection‚ a murder usually follows. She said it was initially suspected that the recent collection was geared towards a fresh hit at Glebelands‚ however she soon learnt that this was paid to a hitman who was now terrorising Umzimkhulu.

At least a dozen bullets were fired from a high-powered rifle into a vehicle in KwaZulu-Natal on Thursday evening, leaving three councillors fighting ...
Politics
4 years ago

Burger was also attempting to draw the commission's attention to the fact that many of the hitmen infesting the hostel were using guns for hire employed to carry out political killings and an assorted other number of hits.

Burger‚ a graphic designer by profession‚ also circulated an illustration of the hostel murders and how they have spread and spilled outside Glebelands. In all likelihood‚ she said that political and other murders on the KZN South Coast and in parts of the Eastern Cape‚ could be traced back to Glebelands hitmen.

She painted a grim picture of a settlement languishing under a dark spell of murders. Glebelands Hostel is in Umlazi‚ south of Durban.

The R15-million Moerane Commission of Inquiry‚ which is investigating the "underlying causes of the murder of politicians in KwaZulu-Natal"‚ was set up by Premier Willies Mchunu in October last year and began its work in March.