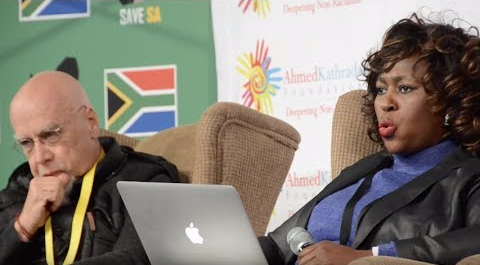 Unrepentant ANC MP Makhosi Khoza has taken aim at the "Johnny-come-lately" KwaZulu-Natal ANC‚ questioning their legitimacy as a structure.

On Wednesday the party's provincial working committee announced via a statement that it planned to institute disciplinary measures against Khoza‚ saying the vocal MP had crossed a line by calling President Jacob Zuma dishonourable and a disgrace at a Mandela Day event on Tuesday.

However‚ not one to take things lying down‚ Khoza delivered an explosive salvo on Friday morning. Writing on her Facebook account‚ the former provincial ANC spokeswoman said the legitimacy of the ANC in KZN is being challenged in court.

This was in reference to the party's controversial 2015 provincial conference‚ which saw then secretary Sihle Zikalala defeating Senzo Mchunu to become the new provincial chair. Defeated party rebels took the current leadership to court‚ citing alleged irregularities‚ with the case still lodged with the Pietermaritzburg High Court.

"Does a structure whose legitimacy is questioned and which has to validate its existence (have) the power to institute disciplinary proceedings?" Khoza wrote.

"Please Comrades don't use my legitimate and rational call to legitimise yourselves. I refuse to subject myself to such a structure. Go to court first and cleanse yourself."

Khoza said she remained loyal to the mission of the ANC and not a "Johny-come-lately" who did not care about the people‚ but only their own pockets.

"I'm disciplined and am trying to fix the image and save the ANC mission which is being molested publicly. Are we together? Respectfully my comrades‚" she concluded.

Outspoken ANC MP Makhosi Khoza on Monday called on Jacob Zuma to step down as president of the country.
Politics
4 years ago

Parliament will be providing security to ANC MP Makhosi Khoza after a police security assessment determined that a security threat exists against her.
Politics
4 years ago

Khoza to face the wrath of the ANC in KZN

ANC MP Mkhosi Khoza "crossed the line" when she labelled President Jacob Zuma a disgrace and a dishonourable leader‚ the party's KwaZulu-Natal ...
Politics
4 years ago

Police Minister Fikile Mbalula has lashed out at fellow African National Congress MP Makhosi Khoza‚ accusing her of ducking himself and investigators.
Politics
4 years ago

Under-fire ANC MP Makhosi Khoza is ducking the police - and the threats against her daughter are not real.
Politics
4 years ago