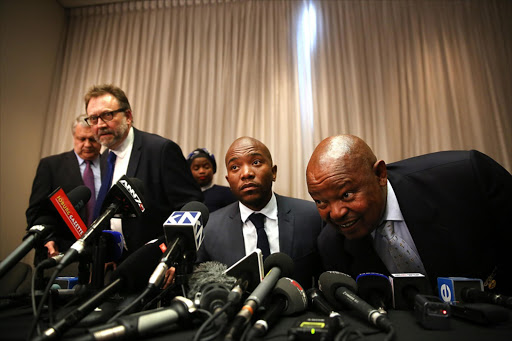 Opposition parties have paid tribute to veteran government spokesman Ronnie Mamoepa who died on Saturday at the age of 56 after battling from complications from a stroke he suffered last month.

She said that as a political prisoner‚ Mamoepa had made an immense contribution to the liberation of South Africa and the birth of the country’s democracy.

“We also remain grateful for his commendable work as a public servant. He was the personification of excellence.

“It is now left on us to ensure that his legacy lives on and we build on the vision of a democratic and prosperous South Africa that he sacrificed so much for.

Congress of the People leader Mosiuoa Lekota said he had known Mapoepa since the era of the United Democratic Front through to the present democratic dispensation.

“We knew Ronnie in Robben Island as a young star. He was a bright and disciplined young man who was always keen to learn. He inspired many young people. Over the years we saw his consistency and commitment growth as years went by.

“He was always a committed and hard working comrade with a passion to communicate to our nation‚ the developments of our struggle and messages of the leadership about the course of action to be pursued at different stages.

“Even in this democratic dispensation he served the government of the day with pride and commitment to keep alive the spirit and principles of service to the people and their development‚” Lekota said.

“On behalf of the Congress of the People‚ I would like to express our sincere and heartfelt condolences to the Mamoepa family and friends of comrade Ronnie Mamoepa.

“May his soul rest in eternal peace‚” Lekota added.