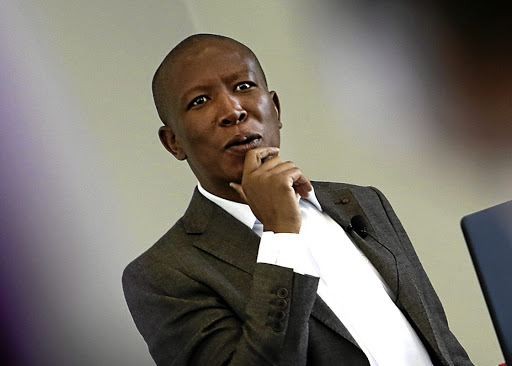 The EFF would consider a coalition with the ANC if the ruling party's next leader declared an end to institutional corruption and promised to charge President Jacob Zuma with corruption.

The EFF and ANC should be working together but what stands between them " is institutionalised corruption by the governing party".

This is what EFF leader Julius Malema told The Times's sister publication, Sowetan, in a wide-ranging interview, as he reflected on his party turning four years old on Wednesday.

If President Jacob Zuma holds the title as South Africa's ultimate political survivor, the first runner-up has to be Sello Julius Malema.
News
4 years ago

Malema said ANC leaders were busy campaigning to replace Zuma in December but none of the contenders was serious about fighting corruption.

He singled out Deputy President Cyril Ramaphosa's campaign, saying he claimed to be against corruption and wanted to rebuild the ANC.

"Why has Cyril not opened a single case against corruption? Cyril and the SA Communist Party protected the Nkandla scandal. We challenge Cyril to go and open a case on corruption. The e-mails have clear evidence of corruption."

Instead of pointing a finger at Zuma's betrayal, Nzimande should maybe concern himself with the duplicity of the SACP
Opinion & Analysis
4 years ago

Malema also challenged Ramaphosa to go to Marikana and face the workers, as well as the widows and families, of the mine workers were killed by the police in 2012.

"He needs to go to the most hostile environment, where he will be attacked, and then humble himself. It has to be genuine; he must ask for forgiveness and commit to compensating them."

He said Nkosazana Dlamini-Zuma was an extension of Zuma and she would not fight corruption.

Julius Malema has a soft spot for Pastor Mmusi Maimane but little respect for politician Mmusi Maimane.
News
4 years ago

Malema said that if the ANC won less than 50% of the vote in the 2019 general election his party would consider forming a coalition with it - but only if the party's leader publicly said: "I will arrest Zuma for corruption" before 2019.

Malema said Zuma should be charged and jailed on several allegations of corruption, including the more than 700 corruption charges dropped in 2009.

"The EFF will work with the ANC whose leader will pronounce before 2019 that he will arrest Zuma for corruption for wrong things he has done while in office."

He warned the ANC that its arrogance was eating it away and was the reason for it losing several metros to the opposition in local government elections.