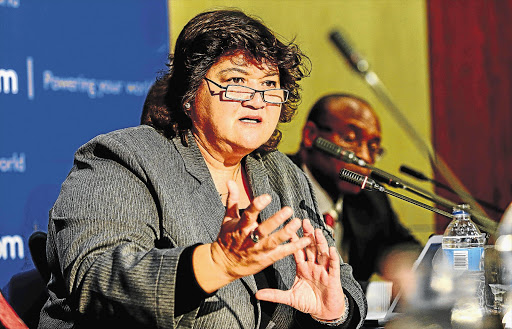 Public Enterprises minister Lynne Brown’s personal assistant is at the centre of a mysterious R32,000 Dubai hotel bill and a chauffeured drive to the Gupta family’s luxury home in the United Arab Emirates city.

TimesLive has discovered details of the trip in the leaked Gupta emails. Brown’s PA Kim Davids on Tuesday confirmed she had been in Dubai in the period indicated in the emails‚ but insisted she had paid her own way.

Trust is the most important asset in any public institution - whether it be a guardian of our constitutional values or a utility providing ...
Ideas
4 years ago

She could not explain why a detailed invoice bearing her name had been sent to the Guptas to settle or why they had been party to arranging a chauffer to ferry someone with her name to their luxury 10-bedroom villa “L35” which is situated at one of Dubai's most sought-after addresses.

Invoices and documents show that in late December 2015 and early January 2016 Rajesh "Tony" Gupta and the family's lieutenants were discussing the payment of a Kim Davids’ stay at the five-star Oberoi Hotel.

The hotel has become infamous for being the go-to place to holiday for the Guptas’ guests‚ including a gaggle of South African cabinet ministers.

At the time that Davids stayed at the hotel‚ Mineral resources minister Mosebenzi Zwane and four-day finance minister‚ Des van Rooyen were also staying there at the Gupta family's expense.

Public Enterprises spokesman‚ Colin Cruywagen‚ told TimesLive that Davids was on leave in December 2015 and had complied with regulations regarding her leave.

He said Brown had been in South Africa at the time.

On Tuesday‚ the Organisation Undoing Tax Abuse made representations to Parliament’s Portfolio Committee on Public Enterprises on the extent of state capture in South Africa. In its dossier of alleged evidence on state capture were the names of several Gupta lieutenants and their deployees. Davids’ name is mentioned briefly among those with alleged links to the Guptas.

Davids was at pains to stress there was nothing untoward about her trip.

“In December 2015 I took leave and booked a holiday with my fiancé in Portugal. On the way‚ in transit in Dubai‚ I fell ill‚ when I learned I was pregnant. We returned home‚ paying our own costs. I reject with contempt those unfounded allegations that cast doubt on my integrity.”

She did not produce proof of her defence when asked to by TimesLive.

The details of the Dubai visit emerge at a time when Brown is under increasing scrutiny and pressure over revelations over the Gupta family’s influence and deals with state-owned entities over which she presides.

“There are no holy grails. The investigators must do their work.

“The Department has been instructed to assist the probe by making documents and officials available to the investigation as required.”

Emails seen by TimesLive show that Davids‚ or at least someone pretending to be her‚ stayed in the Oberoi for four days from December 27 to December 31.

Other emails‚ which were sent between Gupta lieutenants‚ Salim Essa and Ashu Chawla on December 26‚ are in response to the hotel's reservation department‚ in an earlier email enquiry about Davids’ flight details and hotel transfers‚ inadvertently referring to Davids as a man.

Essa tells Chawla that he needs to let the hotel know that the "booking is Ms Kim Davids".

Further correspondence relates to the trip to the Gupta home with Chawla telling the hotel’s concierge: "... As discussed can you please send me the driver details who will be taking Ms Kim Davids to L35 Emirates Hills tomorrow At 9h30.... ”

Later Chawla and Grover discuss the payment of Davids hotel bill‚ which was sent to them by the Oberoi‚ in several emails with the subject: "Bills of Ms Kim Davids".

Evidence in the leaked Gupta e-mails points to a complex multibillion-rand tax-avoidance scheme with family patriarch Atul Gupta at its centre.
Politics
4 years ago