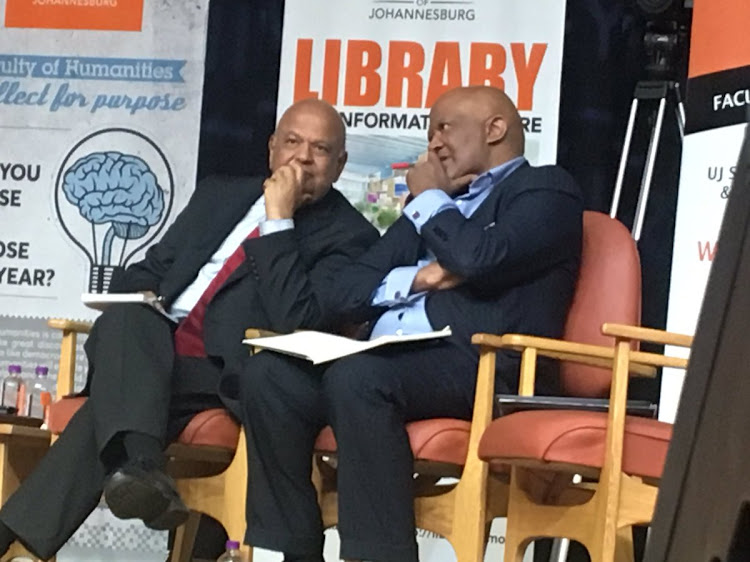 Former finance minister Pravin Gordhan has challenged South Africans to stand up to resist the capture of the state to prevent a “10 year slump”.

"If we keep quiet‚ we are going to slump into a 10-year disaster. It will take five to 10 years to recover‚” Gordhan said.

“This South Africa is our country‚ nobody must be allowed to steal it from us.”

Gordhan calls on Zuma to step down

Gordhan was speaking at a seminar on state capture‚ white monopoly capital and radical economic transformation alongside his former deputy Mcebisi Jonas at the University of Johannesburg on Wednesday afternoon.

Gordhan and Jonas‚ who were dismissed by President Jacob Zuma in March‚ faced a somewhat hostile audience and were intermittently heckled by students in EFF and ANC regalia.

Gordhan said state capture had caused a “serious decline in our morality” and an erosion in the quality of politics.

“We are beginning to blur the lines between what is right and what is wrong‚” Gordhan said.

“How many of you will accept R600 million as a bribe from the Guptas? Here is a person who was offered it but said ‘keep it’‚” he said‚ referring to Jonas’s claim that the Gupta family had offered him the money and the finance minister position.

Jonas was not prepared to sell the sovereignty of the country‚ Gordhan said.

But there are now “too many fence sitters in all our organisations” who were waiting to see how the political situation evolved.

“Now is the time to make a decision on where you stand‚” said Gordhan.

Jonas said South Africa was facing its defining moment‚ both politically and economically.

“Our country is in a crisis of leadership… You can’t have leaders who spend 80% of their time defending their problems‚” he said.

The country’s state-owned enterprises had become centres for money racketeering‚ Jonas said‚ pointing to the high budget contracts available at Eskom and Transnet.

“What we lose through state capture and corruption is what is forfeited by education‚ health and other developmental objectives.”

He said the current politics was fundamentally weakening institutions and producing highly racialised politics. There was also a rise of short term-ism and populism.

Economist Lumkile Mondi‚ who was also speaking in the debate‚ said the Zuma presidency had repurposed the state for private accumulation.

He said the current minister of finance‚ Malusi Gigaba‚ had played a role in this process by granting citizenship to Gupta family when he was minister of home affairs and by appointing people into key positions in SOEs to further the state capture project.