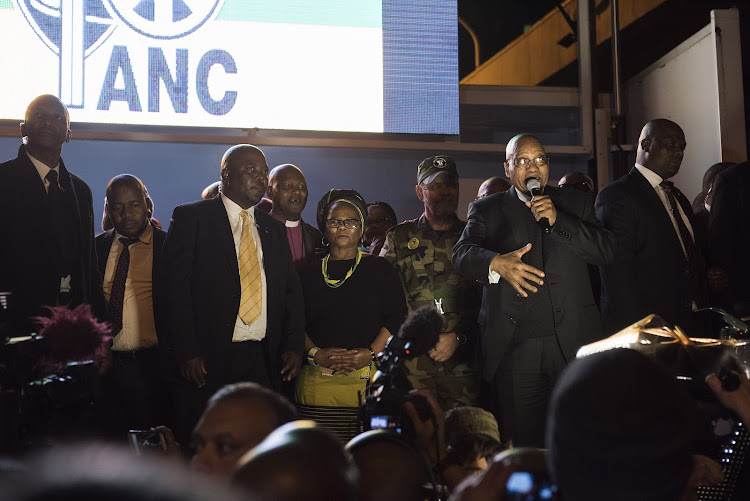 Zuma addresses a crowd of ANC supporters outside Parliament on Tuesday evening, after surviving yet another vote of no confidence....
Image: David Harrison

This followed the failure of a motion of no confidence in President Jacob Zuma in Parliament on Tuesday.

However, Inkatha Freedom Party leader Mangosuthu Buthelezi expressed delight at the number of ANC MPs who voted for the opposition motion.

"This is an excellent result and I am very happy‚" said Buthelezi.

The Democratic Alliance's City of Johannesburg mayor‚ Herman Mashaba‚ tweeted: "This vote by 80% of the ANC ... must drive us to be more resolute to save South Africa."

After hours of voting in a motion of no confidence in President Jacob Zuma, the majority of the National Assembly voted to keep him as president of the country. Subscribe to TimesLIVE here: https://www.youtube.com/user/TimesLive

The Future SA lobby group pronounced: "While today's motion against Zuma may not have succeeded‚ the fact that a number of ANC MPs have either voted in favour of the motion or abstained is an indication that Zuma no longer enjoys the full support of a significant number of members of his own party."

It added: "It is an indication that while he retains power for now‚ his base is certainly weakening."

“The vote to keep Zuma in power is a vote for corruption‚” said Wayne Duvenage‚ Outa chairman. “The Constitutional Court rulings and evidence from several reports on state capture show that Jacob Zuma is not fit for public office.”

In recent weeks Outa has filed charges against a number of ministers and officials in connection with state capture activity and said it would continue to do so.

“Our country is burning but our MPs ignore this‚” Outa chief operating officer Ben Theron said. "South Africa is at its lowest point and civil society will have to work harder to hold government accountable ... By ignoring the evidence of state capture and corruption‚ the MPs associate themselves with it."

Duvenage said: “The president is now living on borrowed time and is spending far too much time having to deal with his own crisis of legitimacy. Very little of Zuma's time is directed at dealing with this country’s problems and challenges.”

The UDM said it accepted the result of Tuesday’s vote on the motion of no confidence but was perturbed by it.

"The people of South Africa have been shown the middle finger for the eighth time‚" Holomisa said in a statement.

"The battle to save South Africa is not over, though. The UDM will join the Economic Freedom Fighters’ court proceedings for Mr Zuma’s impeachment. We shall also intensify our campaigns on the streets‚ in Parliament and everywhere for as long as Mr Zuma remains in office.

The speakers blared‚ the dancers sang‚ but a live parliamentary broadcast silenced thousands of ANC supporters gathered outside parliament to “defend ...
Politics
5 years ago

For President Jacob Zuma to be removed from office a simple majority‚ or 201 of the 400 MPs that would make up the full assembly‚ need to support the ...
Politics
5 years ago