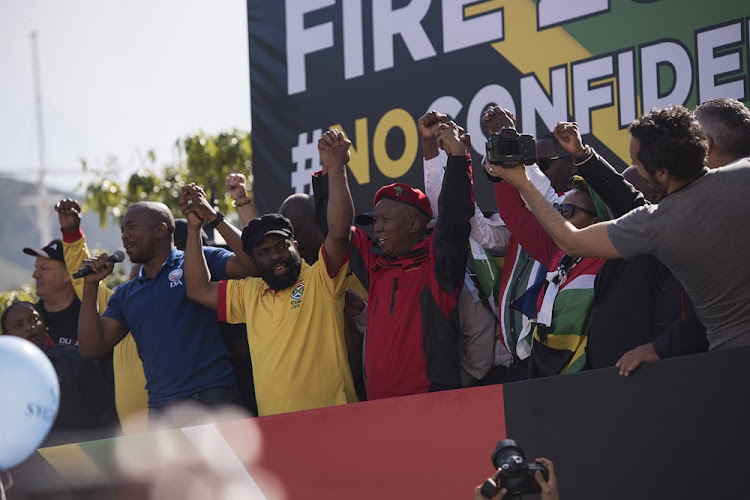 DA, EFF and other opposition leaders talk to supporters outside Parliament on Tuesday.
Image: David Harrison

Speaking to a crowd of a few hundred mostly EFF supporters who stayed outside Parliament on Tuesday to hear the results of the vote on the motion of no confidence in President Jacob Zuma‚ EFF leader Julius Malema said: "I am proud to be South African today because we tested our democracy today and I can confirm it does work."

Malema said the results of the vote on the motion were a sign that the tide was turning.

"We have had seven motions of no confidence before where we have not got one vote."

He said even the nine abstentions were a positive step.

"When your own people abstain instead of voting for you‚ they are passing a motion of no confidence in you."

Speaking to the media‚ he said: "It's clear the tide is turning towards the opposition. This is a big elephant. We said we are going to eat it piece by piece and the results are showing."

He also said he was not surprised by the divided votes coming from the ANC.

"This morning the ANC were trying to present a united front, saying a vote would show their unity. And what happened? Dololo!"

DA leader Mmusi Maimane applauded the "courageous people" of the ANC who had voted against Zuma.

He said while he was disappointed that the motion did not carry‚ he believed it was a sign that Zuma should resign as his own caucus had been shown to be divided.

After hours of voting in a motion of no confidence in President Jacob Zuma, the majority of the National Assembly voted to keep him as president of the country. Subscribe to TimesLIVE here: https://www.youtube.com/user/TimesLive

Asked whether the hours and the money spent on securing the motion and the secret ballot were worth it‚ he said "accountability and democracy are very expensive things" but their pursuit was always worth it.

The DA will pursue its case against Zuma in court in September and continue with impending impeachment proceedings as its next move‚ but Maimane said the focus was on the 2019 election.

"The sooner we get to a general election, the better – the sooner we can get rid of the ANC.”

President Jacob Zuma survived yet another mption of no confidence debate in Parliament on Tuesday. Here's how opposition parties reacted. Subscribe to TimesLIVE here: https://www.youtube.com/user/TimesLive

The speakers blared‚ the dancers sang‚ but a live parliamentary broadcast silenced thousands of ANC supporters gathered outside parliament to “defend ...
Politics
5 years ago

President Jacob Zuma has narrowly survived yet another attempt to have him ousted in Parliament.
Politics
5 years ago

For President Jacob Zuma to be removed from office a simple majority‚ or 201 of the 400 MPs that would make up the full assembly‚ need to support the ...
Politics
5 years ago

No stamp of approval for Zuma from this EFF entrepreneur

Self-taught artist Polly Mohube wants Jacob Zuma to be removed as president because he has failed to create jobs for the youth.
Politics
5 years ago

ANC failed to give reasons why Zuma should be kept in office: Van Damme

Democratic Alliance MP Phumzile Van Damme on Tuesday said the ANC had failed to give reasons why President Jacob Zuma should be kept in office.
Politics
5 years ago

Zuma may drop Zwane if he wins no-confidence vote

President Jacob Zuma is considering making changes to his cabinet if he survives a motion of no confidence in Parliament, according to two African ...
Business Times
5 years ago