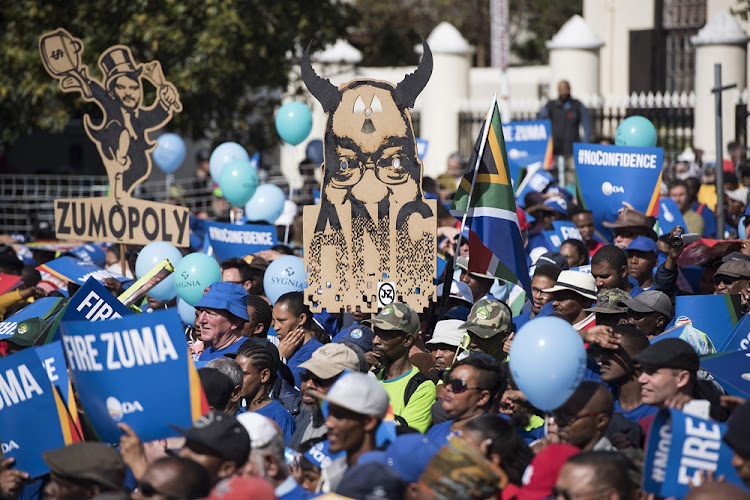 DA, EFF & other opposition party supporters march to Parliament on 8 August 2017. President Jacob Zuma faced a motion of no confidence vote for the eighth time during his right years as president.
Image: David Harrison

It would have been politically dangerous for President Jacob Zuma to have been ousted through a secret ballot‚ a political analyst said on Tuesday.

"It would have been politically dangerous and his supporters would have been up in arms‚ saying it was a 'backdoor victory'‚" said Professor Daryl Glaser‚ head of Wits Political Studies. Zuma survived the vote on a motion of no confidence against him on Tuesday.

In an unprecedented move‚ the vote was cast by secret ballot and Zuma won by a narrow margin.

A total 177 members of Parliament voted for him to go‚ with 198 voting for him to stay. There were nine abstentions.

Glaser said the opposition could celebrate their victory.

"The oppositions can celebrate that there are clear divisions in the ANC but we already knew that. Their consolation can be the fact that Zuma's support is a bit weaker‚" he said.

"A large majority still support Zuma though and we will never know who and why."

Glaser said the number of defectors was "higher than expected" although it was never clear cut whether there was any prospect of success for the opposition.

Political analyst Ralph Mathekga‚ however‚ said it would be wise if the ANC's move to save Zuma came with terms and conditions.

“It cannot be that the ANC saved him without any conditions‚” Mathekga told TimesLIVE.

“It cannot be that they saved him for the sake of it. What will be different now?” Mathekga asked. Mathekga told TimesLIVE that the vote came as no surprise‚ adding that it was “the work of the ANC caucus”. The motion required 201 of the 400-member National Assembly to vote in favour of the motion.

The ANC has 249 seats‚ so all opposition members and at least 50 ANC MPs would have had to vote in favour of the motion for Zuma to be ousted.