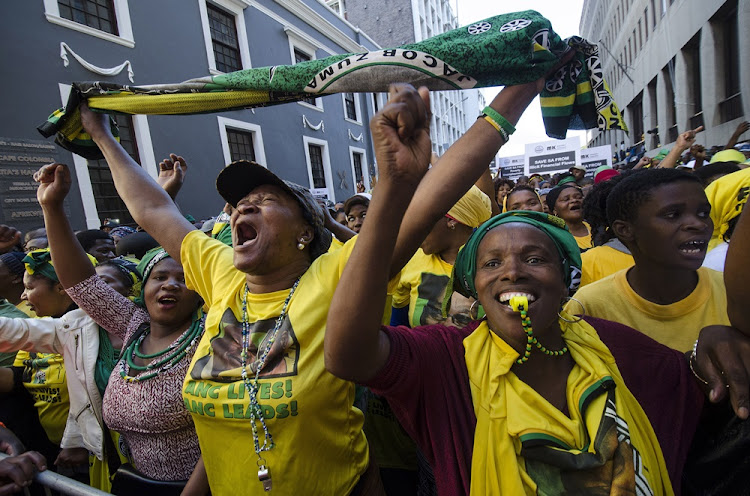 ANC supporters outside Parliament on 8 August 2017. President Jacob Zuma faced a motion of no confidence vote for the eighth time during his right years as president.
Image: David Harrison

President Jacob Zuma did not waste time and immediately hit back at opposition MPs shortly after the motion of no confidence in his leadership was defeated on Tuesday.

Zuma told a crowd of ANC supporters outside the gates of parliament on Plein Street in Cape Town that the ANC could not be defeated through "technicalities" in parliament.

The president was in a celebratory mood and could be seen hugging party leaders as he took to the makeshift stage.

"Thank you very much indeed. Comrades‚ I want to thank all the leaders that are here that come from different provinces. Those comrades who're in parliament needed the support from membership and supporters. You demonstrated that the ANC is there‚ is powerful‚ is big‚ it's difficult to defeat the ANC. You can try‚" said Zuma.

He said the opposition refused to learn as Tuesday marked the eighth time they tried to remove him through a parliamentary motion.

"They always they try. They don't learn that you can't touch the ANC even if you don't love it. They can talk. They can analyse on TV 24 hours a day‚ they can never change the ANC. This time around they were pushing propaganda that you've never seen. They even put people on a list even those that have died. They think people don't think‚" said Zuma.

Zuma said he found certain interpretations of the country's constitution rather odd.

National Assembly speaker Baleka Mbete granted MPs the opportunity to vote in secret in the motion of no confidence for the first time in the history of the democratic parliament‚ following an order by the Constitutional Court that she has the discretion to decide on the matter.

But Zuma said he did not believe that such technicalities should be used in an attempt to remove him and his cabinet from office.

"The interpretation of some of the things are interesting. The ANC was voted by the overwhelming majority of masses of the country. No party has ever received such a number. Now they believe they could use technicalities in parliament to take over the majority in parliament‚" said Zuma.