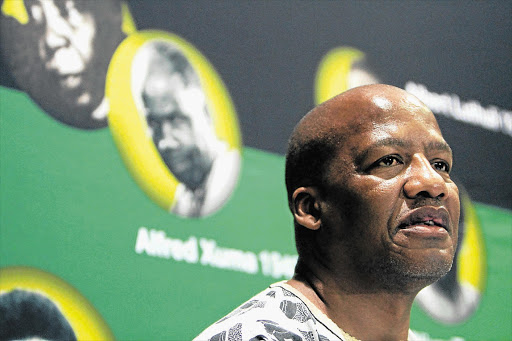 ANC Chief Whip Jackson Mthembu said his focus was not on the numbers but on the fact that they had defeated the motion. File photo
Image: Sunday Times

President Jacob Zuma is to remain in office after surviving the eighth motion of no confidence in his leadership on Tuesday night.

The motion was defeated after 198 MPs voted against it while 177 voted for Zuma to go with nine abstentions.

President Jacob Zuma survived yet another mption of no confidence debate in Parliament on Tuesday. Here's how opposition parties reacted. Subscribe to TimesLIVE here: https://www.youtube.com/user/TimesLive

Speaking to ANC supporters at the gates of parliament shortly after the results were announced‚ police minister Fikile Mbalula said Zuma was going nowhere.

"Asijiki‚ we are not going to be told Zuma must - if he must go he will be removed by us as the ANC.

"We have defeated the useless motion. We can't dance to Mmusi Maimane and all the small boys and girls. People who vote with the motion are suicide bombers.”

In a statement‚ the ANC said it has reclaimed its position as leader of the society.

"The ANC regards it as paramount that not just our elected representatives‚ but all South Africans are able to engage on the most critical issues facing our country without fear or favour.

"Whilst the ANC has consistently noted the numerous challenges facing our democracy as presented by the political opposition – at the same time we cannot lose sight of the record of success and achievement under the ANC government as presented by ANC MPs in today’s debate."

ANC Chief Whip Jackson Mthembu said his focus was not on the numbers but on the fact that they had defeated the motion. "To us that's the most important thing and the ANC has never been an organisation that's punitive. we were confident that we're going to defeat this thing.

"Yes‚ there might be some members of the ANC who might have voted with the opposition but for now the most important aspect is that this vote of no confidence has been defeated. The ANC MPs have not sold out to the DA or the opposition. ANC MPs have defended the ANC‚ we have refused to embolden the opposition.

"All these other things are things that we will look at‚ study them‚ study the maths of who was here and then take it from there but it has never been the DNA of the ANC to be punitive.

"If I was still drinking‚ I would say I am going to get a bottle but I am no longer drinking so I must go and get some bottle of water or juice."

President Jacob Zuma did not waste time and immediately hit back at opposition MPs shortly after the motion of no confidence in his leadership was ...
Politics
5 years ago