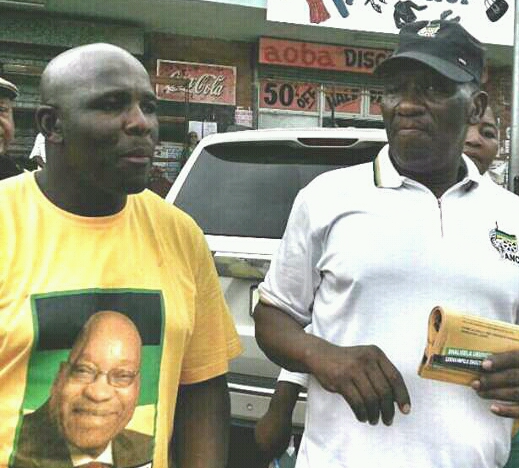 Councillor Ntokozo “Lithi” Maphumulo who was gunned down in KZN with Bheki Cele.
Image: Supplied

A former ANC councillor who was instrumental in the party’s win in the recent by-elections on the KwaZulu-Natal South Coast has become the latest victim of the ongoing political killings in the province.

The ANC in KZN said in a statement on Wednesday that its former councillor‚ Ntokozo “Lithi” Maphumulo‚ 41‚ was shot dead as he arrived at home in eMahlongwa in its Umdoni Sub-Region on Tuesday afternoon.

The party said although details about his killing were sketchy‚ it appeared that his killers were waiting for him at his home and fired several shots at him when he arrived‚ killing him instantly. They used his vehicle as a getaway vehicle and dumped it not too far away.

ANC provincial spokesman Mdumiseni Ntuli described him as “a fearless cadre who served his community diligently and with integrity".

President Jacob Zuma may have narrowly escaped defeat in an unprecedented secret poll in the vote on a motion of no confidence against him on ...
Politics
4 years ago

Maphumulo had previously been a victim of apparent politically-linked violence when‚ according to Ntuli‚ his house was burnt down and a threat was made on his life.

Ntuli said Maphumulo was among ANC activists who worked “tirelessly” to help the party win by-elections in Umdoni's Ward 10.

“He had dedicated his life to serving the ANC and his community and his outstanding leadership skills will be sadly missed by many in the ANC‚ especially those who benefited from his unparalleled wisdom.”

The ANC has urged those with information to assist the police in tracking down his killers.

It was a narrow escape for President Jacob Zuma. Afterwards‚ both sides said they had won.
Opinion & Analysis
4 years ago

Political killings which continue unabated in KZN prompted Premier Willies Mchunu to appoint the Moerane Commission of Inquiry in October last year to investigate the underlying causes of the murder of politicians. It began its work in March.

Acting Hawks boss Lieutenant-General Yolisa Matakata told parliament’s portfolio committee on police in Durban last week that politically-related killings was a matter that was being seriously looked into.

“We’re working on the instigators of the murders. If you don’t get to that level you’re wasting time. You’ll be arresting the hit man. We need to get to the bottom of who are behind the killings. The planners who are hiring the hit men so that we can address the problem‚” she said.

The committee was also told that 23 cases involving politically-related killings were under investigation‚ while 16 others were in court. 59 arrests had been made.

At least R4-million has been set aside for police informers to help the police with information in flashpoint areas such as Umzimkhulu‚ Richmond‚ Inchanga‚ Nongoma and Bergville to ensure that political violence is dealt with before it flares up.