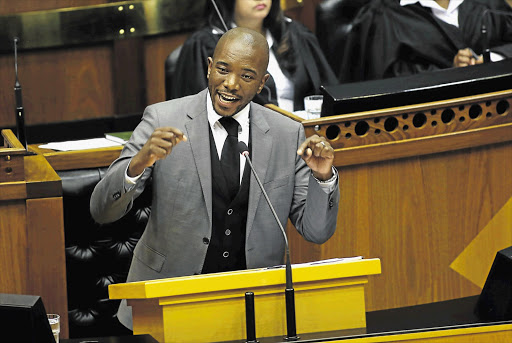 DA leader Mmusi Maimane has called for early elections‚ claiming the government has lost the mandate of the people.

Addressing the parliamentary press corps after Tuesday's failed motion of no confidence in President Jacob Zuma‚ Maimane said the ANC has lost the confidence of the majority of South Africans.

"We say‚ bring it on! Let's fight an election for the future of our country‚ and let's do it now. By the time Jacob Zuma has destroyed the ANC completely‚ and the country‚ it will be too late‚" said Maimane.

He announced that the DA has taken a decision‚ in terms of Section 50 of the Constitution‚ to move a motion in the National Assembly to dissolve Parliament and for an early general election to be held.

President Jacob Zuma may have narrowly escaped defeat in an unprecedented secret poll in the vote on a motion of no confidence against him on ...
Politics
3 years ago

Section 50 states that the president must dissolve the National Assembly if the Assembly has adopted a resolution to dissolve with a supporting vote of a majority of its members‚ and three years have passed since the Assembly was elected.

Maimane said the motion to dissolve the National Assembly and thus trigger an early election would not have to be decided by secret ballot‚ and called upon all those in the ANC opposed to state capture to join forces with the opposition.

It was always going to be about numbers: how many votes in the ballot box; how many years left in power; how many dollars pouring into Dubai bank ...
Ideas
3 years ago

The DA has not discussed the matter with its co-operative partners in the opposition yet‚ and would lobby parties such as the EFF and IFP‚ Maimane added.

Although he agreed that the Independent Electoral Commission would be under pressure to have a voters' roll ready earlier than expected‚ Maimane expressed confidence in the IEC's ability to do it successfully.

President Jacob Zuma is to remain in office after surviving the eighth motion of no confidence in his leadership on Tuesday night.
Politics
3 years ago
Next Article