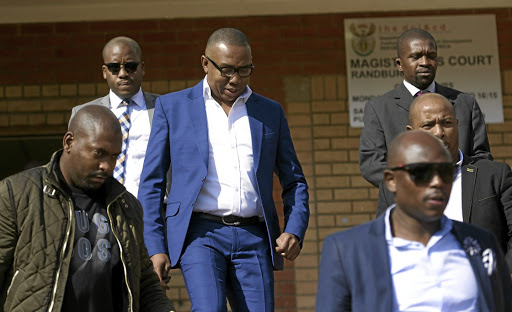 Police Minister Fikile Mbalula insisted that his cabinet colleague, Mduduzi Manana, had not been treated with kid gloves when the deputy higher education minister appeared in court on assault charges yesterday.

Manana appeared four days after he was accused of - and admitted to - assaulting a woman in an attack caught on video.

The 33-year-old politician was granted R5000 bail in the Randburg Magistrate's Court, where he appeared briefly facing two charges of assault with intent to cause grievous bodily harm.

There has been a widespread outcry that he has been treated with kid gloves because of his political position, and calls for his arrest and dismissal from the cabinet.

The ANC's integrity commission said it could not act against Manana until it had investigated.

Mbalula has been hounded on social media and the state accused of double standards in its handling of the Manana case.

Mbalula told the media yesterday that the police did not immediately lock up Manana because he was not a flight risk.

Mbalula claimed the assault was the work of a "clan of men who joined to exchange masculine punches with a woman" outside an establishment that was "well outside of" its legal liquor-trading hours.

And despite Manana being allowed to hand himself over to police instead of being arrested, and being escorted into court through a back door for his first appearance, Mbalula insisted that the deputy minister, whom he referred to by his first name, would not be treated "with kid gloves''.

"There was never a reason to rush the matter, the police were being thorough and ensuring the law is taking its course," he said.

Michael Motsoeneng Bill, appearing for Manana, opposed a request that media be allowed to film the proceedings.

Manana will appear in court again on September 13.

The deputy minister has admitted that, in the early hours of Sunday morning, he lost his cool after an argument about who should succeed President Jacob Zuma at the ANC's elective conference in December.

The altercation was caught on video and shared widely.

"Normally when a person is accused of assault then the police have an option of bringing him into court or to the police station to process him and take him to court to apply for bail. The court then decides whether that person qualifies as someone who should be released on bail," said Ulrich Roux, of BDK Attorneys.

"There's various ways of bringing a person into court. The police could have requested that the deputy minister report and hand himself over to the police station so that the normal process takes its course or they can go out and arrest him," said Roux.

He said Manana should have been arrested immediately after he admitted to committing the crime and that a double standard was being applied.

One of the victims, Mandisa Duma, opened a case of assault with intent to cause grievous bodily harm at the Douglasdale police station on the same day.

Deputy Minister of Higher Education and Training‚ Mduduzi Manana‚ has admitted to slapping a woman in a club in Fourways, north of Johannesburg.
Politics
4 years ago