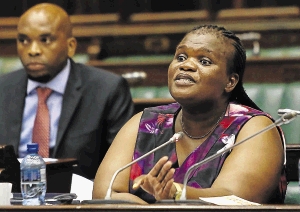 The fallout from last week's motion of no confidence in President Jacob Zuma has spilled over into the work of parliament - MPs loyal to Zuma are refusing to recognise anti-Zuma rebel Makhosi Khoza as chairman of their portfolio committee.

Five MPs regarded as Zuma supporters yesterday boycotted a meeting of the public service portfolio committee, which was scheduled to grill Public Service and Administration Minister Faith Muthambi on allegations that she was hiring close friends and relatives and had flown them at taxpayers' cost to attend her budget vote speech in Cape Town in May.

Khoza has called for Zuma to step down and had stated that she would vote with her conscience on the motion of no confidence in Zuma on Tuesday last week. It is being assumed that she was one of the ANC MPs who voted for Zuma to go.

The five MPs wrote to ANC chief whip Jackson Mthembu a few hours before the meeting stating that they no longer regarded Khoza as their chairman and had "taken a decision to suspend all study group/portfolio committee meetings until the conduct of Dr Khoza is addressed".

One of the African National Congress’ presidential candidates‚ Nkosazana Dlamini-Zuma‚ has lamented divisions in the party‚ describing some as ...
Politics
4 years ago

One ANC MP, Nyami Booi, broke ranks with the group of five and attended the meeting chaired by Khoza. He supported calls by the opposition parties for Muthambi, who failed to present herself as agreed, to be subpoenaed to appear before the committee.

Mthembu said the five MPs who had disowned Khoza had no authority regarding the deployment of ANC MPs.

Mthembu said they were showing themselves to be ill-disciplined by boycotting meetings of the national legislature and action should be taken against them by the national leadership of the ANC.

"Only the ANC through its constitutional structures can remove an ANC deployee. No study group or any deployee of the ANC can remove another deployee. Those comrades who boycotted today's meeting after clear instructions from the chief whip will be referred to the ANC caucus disciplinary committee."

Khoza said she was baffled by Muthambi's no-show; she had met her in Cape Town on Tuesday morning.

"We were together and she did not indicate that she won't be coming to this meeting. It's fruitless and wasteful expenditure. You can't come to Cape Town supposed to attend meeting and don't pitch up. It's really tragic that she is not here," said Khoza.

The EFF's Mbuyiseni Ndlozi said there was a plot to derail the work of parliament: "Faith Muthambi is running away [from being] held accountable about the reports of nepotism and corruption her department. That is why some of the ANC members who wished this committee to not quorate are not here. There is a deliberate plan to collapse the functioning of parliament to hold the cabinet of Duduzane's father accountable," said Ndlozi.