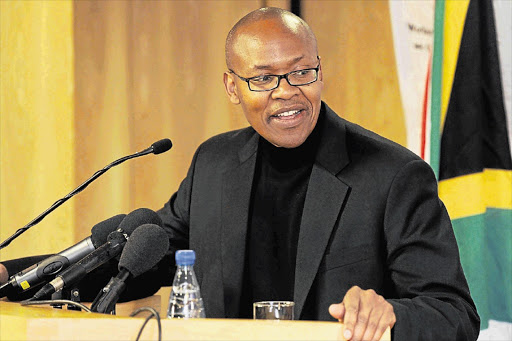 Jimmy Manyi said: “I am delighted to have reached agreement with Oakbay and look forward to successfully completing the deal. File photo.

The Guptas have agreed to sell their shares in The New Age newspaper and ANN7 channel to Lodidox‚ owned by Mzwanele Jimmy Manyi‚ for R450-million.

Oakbay Investments said in a press release: “The sale will also allow the shareholder [the Gupta family] the time to focus on clearing its name in the face of unfounded media allegations.”

Oakbay will sell its shareholding in Infinity Media‚ which runs ANN7 TV news‚ for R300-million.

Oakbay’s two-thirds stake in TNA Media‚ the publisher of The New Age‚ will be sold for R150-million.

The agreement is expected to be concluded over the next few weeks‚ subject to regulatory requirements.

“The sale is part of Oakbay’s commitment to preserve jobs and provide certainty to over 7,500 hard-working employees throughout the group and to safeguard the inherent value of the businesses in which they work‚” Oakbay said.

Manyi said: “I am delighted to have reached agreement with Oakbay and look forward to successfully completing the deal.

These are two strong businesses which are full of potential and‚ under the right external circumstances‚ can become an increasingly important and relevant part of the South African media landscape.

In addition‚ I am particularly impressed that the shareholders of Oakbay have agreed to do a vendor financing at acceptable terms as part of their commitment to transformation and to expedite the transaction.”

Ronica Ragavan‚ acting chief executive of Oakbay‚ said: “We are delighted to have reached an agreement with Lodidox and the management team; the sale of our shareholdings will secure the future of these businesses and help preserve the jobs of their employees. Both businesses are inherently sound and well positioned for growth in their respective market segments. We wish them every success in the future.”

In the third episode of our Stolen podcast, we talk about what it takes to be an investigative journalist and why it’s better to have a knife in a ...
News
4 years ago

The Gupta linked Oakbay says underprivileged university students in South Africa will be the beneficiaries of legal costs due to be paid to it by the ...
Politics
4 years ago

The High Court in Pretoria has dismissed former finance minister Pravin Gordhan's application for a declaratory order on whether he could interfere ...
Politics
4 years ago

Companies controlled by the Gupta family, whose accounts are being closed down by Bank of Baroda, said they’re taking legal action against the lender ...
Business
4 years ago

UK public relations company Bell Pottinger will face a disciplinary committee on Friday after being accused of exploiting racial tensions in South ...
News
4 years ago

ANC presidential hopeful Dr Nkosazana Dlamini-Zuma on Tuesday voiced her backing for a commission of inquiry into the Guptas’ alleged infiltration ...
Politics
4 years ago

Parliament's mineral resources committee has not enthusiastically embraced the prospect of an inquiry into state capture and has been accused by the ...
Politics
4 years ago