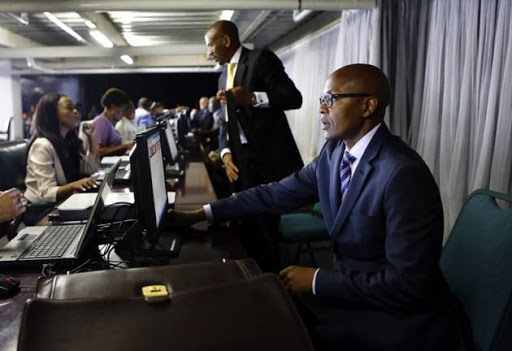 Mzwanele Manyi said on ANN7 that the deal was being attacked because he was black.
Image: Gallo Images / The Times / Moeletsi Mabe

The controversial Gupta family has announced that it is selling its media assets to Mzwanele Manyi‚ a former government spokesman and head of the Government Communication Information System (GCIS).

Here are seven useful facts about the deal.

In March‚ Bloomberg reported that the Bank of Baroda was closing all Gupta-linked bank accounts. This news came after the Guptas’ four local bank accounts were shut last year. In May‚ the Gupta leaks emerged‚ linking the family to dozens of South African politicians and suggesting they were involved in money laundering. In July‚ the Bank of Baroda confirmed accounts of all Gupta-linked accounts would be shut by the end of August. Manyi became director in June. With just over a week to go of functional bank accounts‚ the Guptas company announced the deal.

2. It is vendor financed

The Oakbay statement on the deal mentioned it is vendor financed‚ which means the Guptas lent Manyi the money to buy the companies from Oakbay Investments.

But lending money to someone to buy your business usually means one person in the equation loses‚ he explained. Either there is just too much money for the new owner to pay back or the previous owner discounts the price and value of the company when he sells it.

Van den Heever noted that the decision didn’t make business sense as media companies are struggling financially‚ so Manyi was borrowing hundreds of millions of rands to invest in a risky business.

3. Manyi: The criticism is because I am black

Manyi said on ANN7 that the deal was being attacked because he was black. “One of biggest challenges in South Africa is colonialisation. When a black African person does something‚ immediately you have stolen money.”

4. The valuation of the companies has been questioned

ANN7 was sold for R300-million. That price tag is far too high‚ according to Patrick Conroy‚ former editor-in-chief of 24-hour news channel eNCA.

He tweeted: “I've never run a newspaper but did run eNCA 24hr news for nearly 10 years. No chance #ANN7 is profitable or worth R300m.”

The New Age‚ which does not provide circulation figures‚ is said to be worth R150-million even as newspaper circulation plummets. For example‚ in the second quarter of this year‚ all daily newspaper sales dropped from 1‚278‚157 in 2016 to 1‚163‚265.

Manyi said on ANN7 he had to pay interest on the loan. “I have R450-million that I owe at a particular interest rate that makes sense to me.”

If the R450-million plus interest is repaid‚ the Guptas will have made good money.

Many of the current advertisers and subscribers to New Age are government departments and parastatals‚ meaning the businesses are funded by tax payers.

It emerged in June this year that the SABC had spent R20-million on New Age breakfast briefings‚ with Prasa spending R3-million to subscribe to the paper in 2013.

He sent the Guptas his CV for a job in May 2014‚ Gupta emails have revealed.

Manyi has tweeted for months in the Guptas’ defence and said a great deal about the “white monopoly capital” narrative around the time it was devised by UK PR firm Bell Pottinger.

Manyi was spokesman at Tiger Brands when it was fined almost R100 million for bread price fixing.

6. "The deal is radical economic transformation"

“If there is anything called radical economic transformation‚ this is it. Overnight we have a business that will be owned by a local black South African. It is not just a person from the street. I bring background. I used to run the GCIS (Government Communication Information System). I see this as the GCIS on a grander scale. It is GCIS for the country‚” said Manyi told ANN7.

In a video seen by Business Day‚ The New Age/ANN7 editor-in-chief Moegsien Williams told staff that the deal would benefit the company and help save 7‚500 jobs.

When Africa Check attempted to verify the Guptas’ claim of employing 7‚500 people‚ it found ANN7 employed about 282 staff in April 2016 and all Gupta companies combined employed less than 5‚000 people, excluding those at The New Age, for which they couldn't find an employee total.

South Africa's newest media powerhouse - the new owner, for R450-million, of the Gupta family's media assets - has a humble base at a face-brick ...
News
3 years ago

Monday's news that the Gupta-owned OakBay has decided to sell its media assets to former government spindoctor Mzwanele Manyi is an indication of how ...
Ideas
3 years ago
Next Article