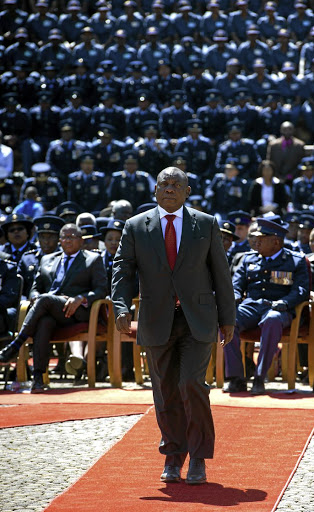 It follows details of his sex life and extramarital affairs making headlines in Sunday newspapers.

Ramaphosa has been vocal against state capture and corruption in his campaign race.

The leaking of his e-mails is widely seen as a political smear campaign against him for speaking out against state capture and involving the country's intelligence services ahead of the ANC's December elective conference.

Ramaphosa has admitted to one relationship, but claims it ended years ago.

"He has no choice. The question is how he is going to do it," he said.

Gutto believes the allegations were strategically designed to cause damage to Ramaphosa before December.

"He can fight it, but whether it will be enough to be able to convince [delegates to the elective conference] is another thing.

"There is a fierce fight going on within the ruling party. It is vicious and they will use everything."

Professor Susan Booysen, of Wits School of Governance, said the question was whether or not the allegations would affect Ramaphosa's campaign.

"I think he does suffer a bit of reputational damage, but also look at all the responses on social media and other statements and people speaking seem to be seeing the bigger picture."

There is a fierce fight going on within the ruling party. It is vicious and they will use everything.

Political analyst Ralph Matshekga said there was no doubt the recent leak came from intelligence quarters.

The Sunday Independent's questions to Ramaphosa were leaked on Friday night and circulated on social media.

WMC Leaks, an anonymously run website that targets those who criticise the controversial Gupta family and their associates, started tweeting about the leaked questions and
e-mails on Saturday.

"We are descending to the levels of salacious stories to detract the campaigns. The issue of conduct can be looked into but at whose expense?" he asked.

Nkosi said Sisulu was aware that there could be a dirty campaign against her.
- Additional reporting by Genevieve Quintal

Presidential hopeful Cyril Ramaphosa has denied allegations - contained in leaked questions purportedly sent to the deputy president by the Sunday ...
Politics
4 years ago