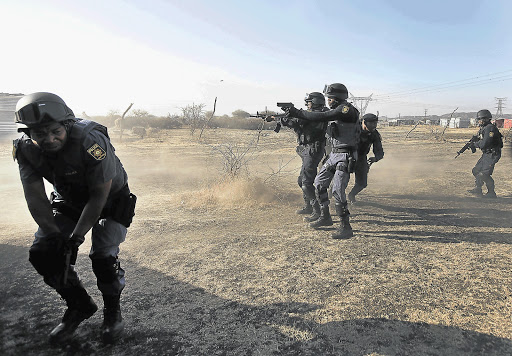 Five years after Marikana‚ the police are still struggling to tick off items on the to-do list of recommendations made by the Farlam Commission to overhaul the way crowds and protests are managed and policed.

The Farlam Commission made a long list of recommendations to ensure that police were properly trained and managed in instances of public violence to ensure that the mistakes made at Marikana were never repeated.

The panel of experts set up to investigate and overhaul public order policing and the transformation task team appeared before the police portfolio committee on Tuesday where MPs expressed concern about the long period of time it has taken to implement the Farlam Commission's recommendations.

Chairperson Francois Beukman questioned why "quick wins" like first aid training for all officers were not made a priority.

Recent media coverage of events commemorating the fifth anniversary of the tragedy of Marikana - where more than 40 workers lost their lives - has ...
Opinion & Analysis
4 years ago

"The biggest concern is the time lapse‚" he said.

The Farlam Commission recommended that all police officers be trained in basic first aid.

But deputy national commissioner for human resource management‚ Bonang Mgwenya‚ told the committee that "first aid training is informed by the budget".

Mgwenya admitted that 270 were "not enough" but said the number did not include new recruits who underwent first aid training in their basic training.

Mgwenya said the unit had grown to 5‚343 officers‚ after 1‚258 new posts were granted and filled last year.

The government has paid R3.9-million to a family that claimed loss of support as a result of a death in the 2012 Marikana massacre.
News
4 years ago

Not listed on the inventory of resources were police body cameras‚ which DA MP Dianne Kohler-Barnard questioned.

Deputy national police commissioner Gary Kruser told the committee that the issue of body cameras was being considered by the expert panel appointed to look into reforming public order policing but that evidence had showed "that some countries using them have picked up problems".

The people of Marikana are not fooled by this sorry bunch of ANC candidates, and nor should we be

Would Nkosazana Dlamini-Zuma have deigned to visit Marikana had the 2012 massacre of mineworkers not been an albatross around the neck of Cyril ...
Opinion & Analysis
4 years ago

Eldred de Klerk who presented on behalf of the panel of experts said the use of the cameras would require a vast system which would be able to deal with all of the video data being produced‚ and to store and sort it for use in training‚ or in prosecutions.

De Klerk told the committee "under general customary rules‚ the core legal consequences of every national and international act are a duty to cease the violation and ensure it doesn't happen again to repair the damage caused."

One of these actions‚ he said was the "determination and settling of compensation claims". While the panel was specifically tasked with this‚ they were monitoring progress.

Lieutenant-general Sally Kahn told the committee that 31 loss of support claims had been submitted to actuaries‚ and only family had been paid out R3.9 million.

Offers of between R20‚000 and R50‚000 had been made to the 275 plaintiffs‚ who were claiming for wrongful arrest‚ but these had been rejected because of a dispute over the length of the detention period.