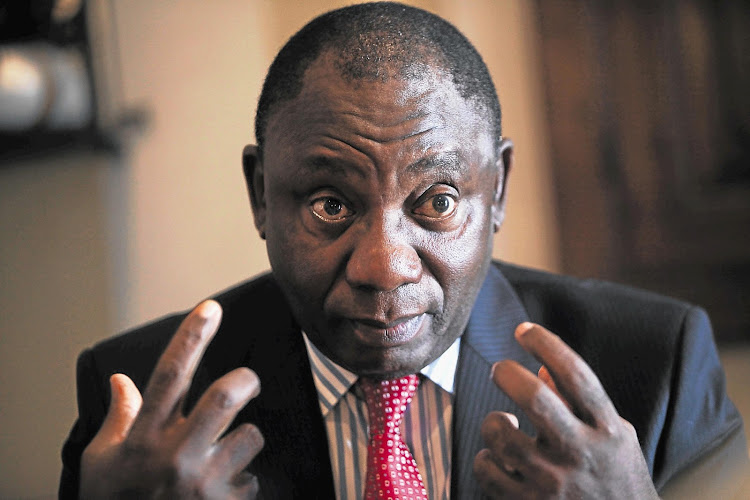 In an apparent about turn on its expose about Deputy President Cyril Ramaphosa's alleged infidelity‚ the Sunday Independent is now reporting that the presidential hopeful remains unshaken by a “dirty tricks” campaign.

“Deputy President Cyril Ramaphosa‚ whose presidential campaign is modelled on moral and ethical leadership‚ appears not to practise what he preaches‚” wrote editor Steven Motale on September 3.

The newspaper published "explosive leaked emails" about Ramaphosa. But now – after Motale was placed on stress leave - in an editorial on Sunday‚ the publication said: "Our story last week linking deputy president Cyril Ramaphosa to alleged extra-marital affairs has forced us to introspect and to redefine our editorial processes.

"While we do not condone infidelity‚ alleged or real‚ our story‚ coming at a crucial time in the race to succeed Zuma as ANC president‚ may have created an impression that we are meddling in the party's succession battles. We are not‚" the paper said on Sunday.

The curious case of Dlamini-Zuma and her dicey career strategy

Nkosazana Dlamini-Zuma is one of the most curious characters in South African politics.
Opinion & Analysis
4 years ago

"The backlash has been so serious that our editor‚ Steven Motale‚ has taken stress leave following death threats. We condemn these in the strongest terms."

The newspaper said it was unable to continue with a planned series of articles on Ramaphosa's alleged affairs "because the editor is the sole custodian of this story".

"We apologise to readers for any inconvenience caused‚" said the paper. "We assure you that this is in no way a sign that the intimidation tactics have worked‚ and that we are not willing to be pawns in the ANC succession wars. That battle is not ours."

Motale had earlier written an editorial dismissing allegations over questions about his integrity.

"I've noted with utter disgust the attempt by some elements in the media to cast aspersions on my integrity by linking me to "a smear campaign" aimed at bringing down Deputy President Cyril Ramaphosa‚" he wrote.

Cosatu's Dlamini on Ramaphosa 'plot': It was just an SMS

Cosatu president Sdumo Dlamini has downplayed claims that a plan is being hatched to remove deputy president Cyril Ramaphosa in order to destabilise ...
Politics
4 years ago

"These sustained attacks on me before and after the publication in The Sunday Independent last Sunday on the deputy president’s emails to alleged lovers give weight to questions that I've raised before on our media's commitment to ethical journalism."

Days after the publication of the story‚ over which Ramaphosa and the newspaper were locked in a last minute court battle a day earlier to prevent its publication‚ Motale was accompanying Kenny Kunene when the businessman and socialite's car was shot at.

An editorial in the Sunday Independent this Sunday‚ quoted a statement confirming that Motale was on stress leave.

"Motale indicated to Independent Media that he has received death threats recently and requested time to deal with the trauma‚" the editorial said.

"Independent Media wishes Mr Motale and his family well during this difficult period."

The editorial claimed Motale had received death threats following the publication of the article about Ramaphosa's alleged affairs‚ with the newspaper claiming those making the threats revealed themselves to be Ramaphosa supporters.

Deputy president Cyril Ramaphosa came out guns blazing on Sunday against state capture at a cadres' assembly in the Northern Cape.
Politics
4 years ago

Meanwhile‚ Ramaphosa came out guns blazing while speaking at the Cadres Assembly in Kimberley in the Northern Cape on Sunday.

He had harsh words to say for those linked to state capture.

"And the money that has been stolen‚ we want it back‚" he said.

"We say this‚ because we want our state owned enterprises to serve the interest of our people… to serve the economy of our country properly."

Ramaphosa said rather than addressing the issues of economic growth and equality in South Africa‚ there was infighting and division among the party.

"We are facing our own internal problems and we continue to make a number of mistakes that make our economy difficult to grow‚" he said.

He reminded cadres at the assembly that the oldest liberation movement on the continent was formed to repair South Africa and keep it on the right track.

"We all have a duty‚ comrades‚ to build‚ to strengthen and to defend the unity of our organisation as well as our alliance.

"Whether we are in elected positions or not‚ that is the duty that we have and the overriding concern‚ comrades‚ of the ANC‚ at this point in time‚ the number one task that the ANC has is to reduce poverty‚ to reduce unemployment and inequality‚" Ramaphosa said.