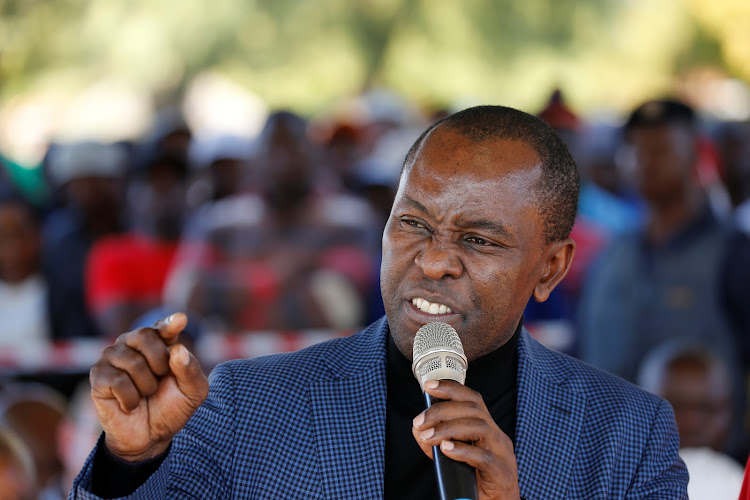 The Organisation Opposing Tax Abuse (Outa) has threatened to haul mining minister Mosebenzi Zwane and the Bank of Baroda to court if they do not guarantee the safety of over R1-billion held in mine rehabilitation trust funds linked to Gupta-owned company Tegeta.

Outa has given Zwane and the trustees of the rehabilitation fund accounts until Thursday morning to make the guarantees or face legal action. The bank has until the close of business on Wednesday.

The Bank of Boroda is currently embroiled in a legal dispute with the Gupta family and their companies after it threatened to close 21 accounts linked to the family’s businesses.

This includes the bank accounts of Oakbay Investments‚ the company that owns Tegeta Exploration and Resources. During the Bank of Boroda’s court proceedings it emerged that the R1.7-billion Optimum and Kroonfontein mine rehabilitation trusts are among those Boroda wants to close.

Outa is concerned that the bank could seize the funds when closing the accounts.

In lawyers’ letters seen by TimesLIVE‚ Outa has demanded guarantees that the money will not be touched.

The organisation has also petitioned Zwane to step in.

'We have never served the Guptas', says consultancy firm McKinsey

International consultancy firm McKinsey‚ which has been dragged into the Gupta state capture saga ‚ has distanced itself from its South African ...
News
4 years ago

In the letter to Zwane‚ Outa head of legal affairs Stefanie Fick criticised Zwane for not replying to an earlier letter requesting intervention.

In that letter Outa requested guarantees from Zwane and the trustees that the rehabilitation funds were still intact.

Fick said if the Bank of Boroda’s Pretoria High Court case succeeds it would close the Gupta bank accounts “and irreparable harm will be caused to the trusts".

Fick said Outa had also learnt that the trust funds were being used outside of laws governing rehabilitation mine trust funds.

"The Kroonfontein trust funds were used in 2016 to secure loans for the Kroonfontein mines which is unlawful and demonstrates that the funds are compromised and at risk.

"We demand to know what will happen to the funds should the bank accounts be closed.

"We also demand that you take immediate steps to prevent the further unlawful use of the trust funds for non-rehabilitation purposes."

In her letter to the bank‚ Fick said at the time Outa wrote to Zwane last month it was unaware that the trusts bank accounts were to be closed.

"Outa received no substantive response from the minister or trustees‚ with Oakbay Investment's acting CEO‚ Ronica Ragavan‚ declining to engage with Outa.

A R13bn tax shortfall - and we know how fiscal holes are filled‚ don’t we?

“Bad news‚” you tell your beloved as you slump at the kitchen table after a long day at the office. “I’ve done the sums and we’re not going to have ...
Ideas
4 years ago

"Outa has since obtained access to court papers exchanged in the High Court proceedings to interdict the bank from closing the accounts.

"The court papers confirm that the trusts accounts are among those to be closed. Its apparent from the Bank's court papers that it has concluded agreements with the trusts that entail the use of the Kroonfontein trusts funds for security against the loans of Kroonfontein mines."

She said it was also clear that the bank was seeking to "call up all of its loans".

"The Bank is aware that the trusts can only be used for purposes outlined in the National Environment Act and Petroleum Development and Resources Act."

The act allows such funds to be used for rehabilitating areas once mines have closed and for community development.

Fick said that it had been reported that the trusts represented more than 90% of the deposits held by the bank in South Africa.

"In circumstances where the Bank is calling up the loans linked to businesses associated with Gupta-linked companies it seems the bank is acting unlawfully."

She added that any money taken from the trusts by the bank would have to be repaid.

Zwane's spokesman Martin Mdlala said they would respond soon to questions from TimesLIVE.