Cosatu's Sdumo Dlamini opens up about plot to oust him 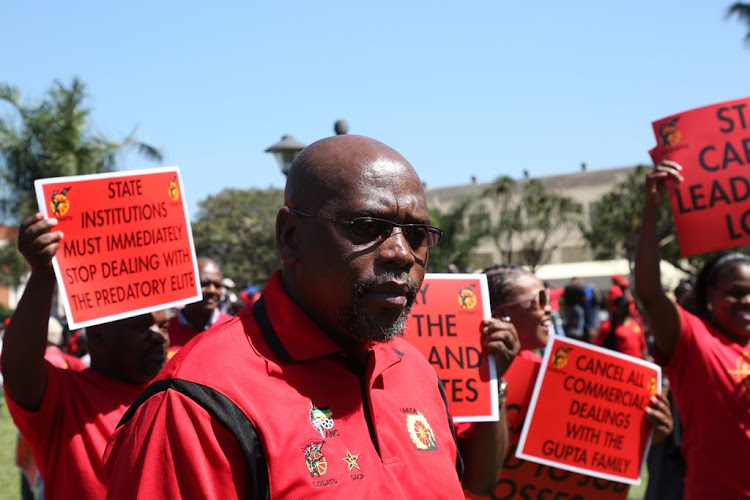 Cosatu President Sdumo Dlamini at King Dinuzulu Park in Durban ahead of a march against state capture on 27 September 2017.
Image: Jackie Clausen

Cosatu president Sdumo Dlamini says leaders of the union federation and of the governing tripartite alliance are working to oust him.

Speaking in an interview on Ukhozi FM’s current affairs show on Tuesday evening‚ Dlamini said some of these individuals were working with the media to drive a wedge between him and the rest of the Cosatu leadership‚ and that of the tripartite alliance.

His comments came days after reports emerged that Dlamini‚ who is seen as being close to President Jacob Zuma‚ did not participate in preparation for Wednesday’s march against state capture.

Cosatu and the SACP are to stage mass demonstrations across the country in an attempt to press the authorities to probe allegations of state capture.

WATCH | #CosatuStrike marchers: 'We are ready for Ramaphosa

LIVE | 'We are ready for Ramaphosa': #CosatuStrike underway

Trade federation Cosatu has threatened to shut down the country on Wednesday as it embarks on a national strike against state capture.
Politics
4 years ago

There was very little to no schooling in Soweto on Wednesday as teachers arrived to find no pupils to teach due to the march organised by Cosatu.
News
4 years ago

President Jacob Zuma was among the 'elites' that the SACP and Cosatu will be marching against, Solly Mapaila said during a briefing on Tuesday.
Politics
4 years ago