Marchers start to gather in Durban ahead of Cosatu protest 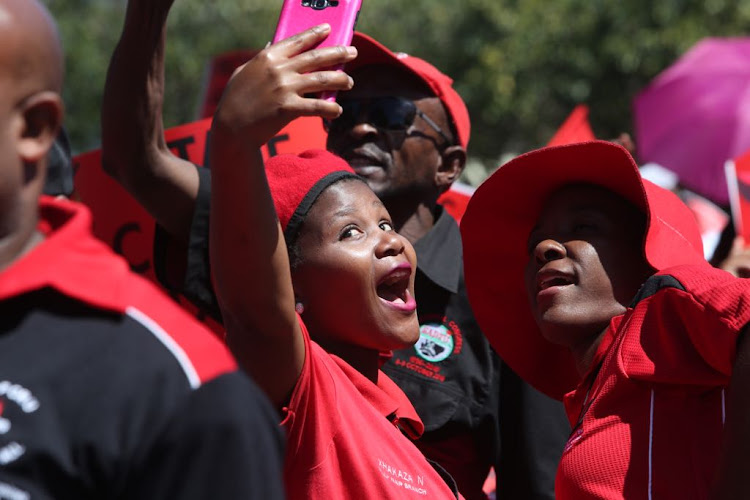 Always time for a selfie: Protesters gather in Durban ahead of the Cosatu march against State Capture on 27 September 2017.
Image: Jackie Clausen

Workers have slowly started to gather in the shadow of the King Dinuzulu in downtown Durban on Wednesday‚ as they prepare to take part in an anti-corruption march organised by trade union federation Cosatu.

Thousand of workers are expected to march through Durban central. The federation's president S'dumo Dlamini is billed to lead the march - the second in the city in two days‚ after members of the Communication Workers Union protested against low Post Office salaries on Tuesday.

The Cosatu demonstration is in opposition to state capture.

LIVE | 'We are ready for Ramaphosa': #CosatuStrike underway

Trade federation Cosatu has threatened to shut down the country on Wednesday as it embarks on a national strike against state capture.
Politics
4 years ago

The KwaZulu-Natal wing of the congress is purported to have mobilised workers from across the province‚ most of who were shuttled into the city by bus.

The march will start at the King Dinizulu Park‚ move along Dr Pixley isa kaSSeme Street (formerly West Street) to the City Hall‚ where a memorandum will be handed to the KwaZulu-Natal Premier Willies Mchunu.

It will then move onto the nearly Durban Chamber of Commerce building and then the Department of Labour offices.

There was very little to no schooling in Soweto on Wednesday as teachers arrived to find no pupils to teach due to the march organised by Cosatu.
News
4 years ago

The South African Police Service has urged protesters to abide by the law as Cosatu’s planned national strike against state capture gets under way.
News
4 years ago

Cosatu embarks on national strike, threatens to 'shut down country'

Trade federation Cosatu will on Wednesday embark on a national strike against state capture.
Politics
4 years ago