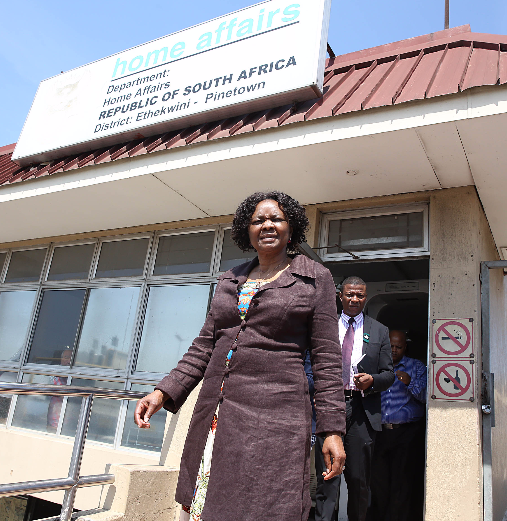 Minister of Home Affairs Hlengiwe Mkhize asked her department's director-general, Mkuseli Apleni - whom she has now suspended - to help her son in settling a legal dispute with the department involving nearly R1-million, it is alleged in court papers.

Apleni has made an urgent application to the Pretoria High Court for a declaration that his suspension from his duties by Mkhize was unconstitutional and invalid.

He has asked for the case to be heard on October 3.

Apleni was placed on precautionary suspension on September 18 pending the outcome of an investigation.

Apleni said in his application that his case is urgent because he believes Mkhize will try to settle multimillion-rand disputes in his absence, including a claim from the company that her son, Sizwe Mkhize, works for, Atlantic Corporate Travel.

He also raised other concerns, including current litigation between the department and Fireblade, owned by the Oppenheimer family, and a claim of R300-million against the department by Double Ring Trading 222, a company Home Affairs accused of fraud in 2009 and stopped paying.

Double Ring was hired to provide satellite bandwidth to Home Affairs satellite offices but instead of invoicing at R2450 a unit the company invoiced at $2450 a unit - resulting in a 750% mark-up at the then exchange rate.

"Since the minister took her position she apparently has been of the view that the claim is to be settled," Apleni said in his affidavit.

Fireblade has been the subject of an epic tussle between the Oppenheimer and Gupta families, both of which want to control the VIP terminal at OR Tambo International Airport. A request by the Oppenheimers that immigration services be provided at the terminal was denied and this has sparked a court battle.

Home Affairs Minister Hlengiwe Mkhize on Tuesday wriggled her way out of media questions about the sudden suspension on Monday of her ...
Politics
4 years ago

One of the reasons given by Mkhize for the action against Apleni was that he had "dismally failed to show diligence and urgency" in resolving legal disputes involving the department.

In his court papers, Apleni says he believes the issue between the minister's son, the company the son represents and the department could be one of the matters Mkhize refers to.

"I believe that there may be other motives that underlie why I have been suspended. I am concerned that in my absence steps will be taken to settle matters that ought not to be settled," he said.

He said the minister's son Sizwe had been using "his relation to the minister to have this matter settled in his company's favour".

He included correspondence in the court papers to back his claim.

In a letter responding to Mhize's allegations before he was suspended, Apleni said the minister had personally asked him to assist in this dispute.

In a letter telling Apleni of his pending suspension, Mkhize accused him of failing to provide effective leadership during negotiations with unions, failing to fill critical posts in the ministry and failure to arrange regular meetings between herself and senior officials to keep her informed of developments.

Apleni wants the court to declare that Mkhize does not have the authority to suspend him, and that his suspension is unconstitutional and is set aside.

Mkhize did not respond to questions sent by e-mail.