NPA accused of failing to act against corruption in PRASA 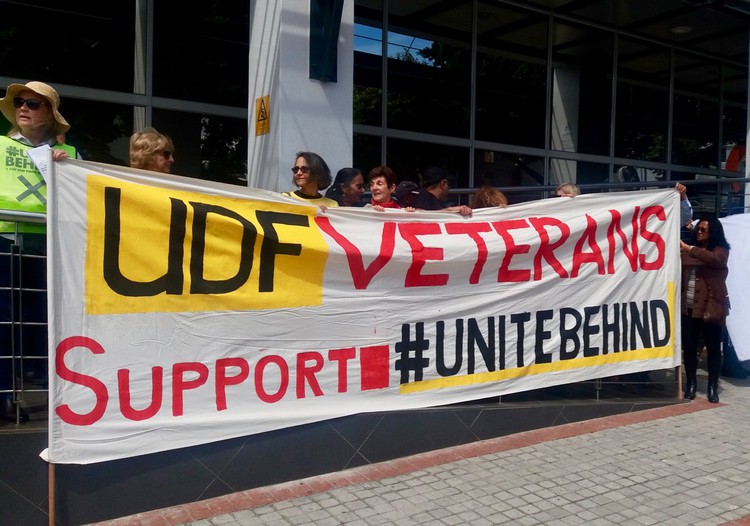 UDF Veterans and #UniteBehind picket outside the offices of the National Prosecuting Authority in Cape Town.
Image: William Yoder

On Thursday about 40 representatives of UDF Veterans and #UniteBehind picketed outside the offices of the National Prosecuting Authority (NPA). They delivered a letter to Shaun Abrahams‚ National Director of Public Prosecutions‚ demanding that action be taken against individuals implicated in state corruption.

The picket was supported by the Right2Know Campaign‚ Equal Education (EE) and Ndifuna Ukwazi. Demonstrators chanted “Wake up Shaun Abrams”‚ “Seize the assets‚ fix our trains”‚ and “Down Zuma‚ down!”

The letter signed by 130 UDF veterans was handed over to the NPA’s regional communications manager‚ Eri Ntabazalila. Ntabazalila said he had already sent other documents from the previous protest to Pretoria [Abrahams’s office] and he would do the same with this letter and petition.

The letter goes into detail about cases relating to PRASA – the Swifambo Rail leasing contract and Siyangena Technologies tender award – and the inaction of the NPA and Hawks.

“You [Abrahams] go to great lengths to explain all the different initiatives underway to combat corruption‚ but you fail to explain why they all appear to be so ineffective in curbing corruption‚” it states.

The veterans accuse the NPA of not only failing to act but of “frustrating numerous investigations into corruption”. In a message of solidarity‚ Vuyisa Mbayi of Equal Education said: “Public schools in KZN and Eastern Cape face infrastructure problems. When we ask the government for resources to fix the schools it says there is no money but we know the money is being looted to Dubai. Corruption takes the only hope that remains of the poor and working class. Corruption is the stumbling block of progress in this country. Why is Abrahams taking [so] long to act?”

Last month‚ GroundUp reported on the UDF Veterans’ frustration with Shaun Abrahams and the NPA.