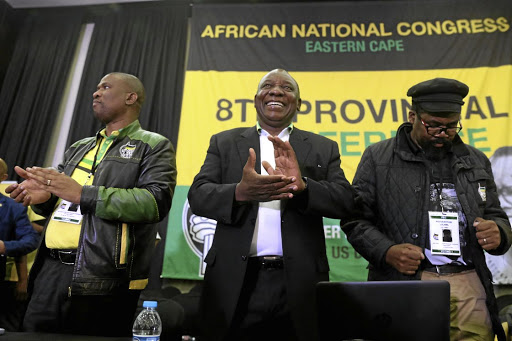 The ANC's chaotic Eastern Cape provincial conference at the weekend was a critical boost for Deputy President Cyril Ramaphosa's bid to become the party's next president.

Oscar Mabuyane, elected provincial chairman yesterday, and his leadership bloc have cemented support for Ramaphosa from the ANC's second-largest province.

But this outcome was not without a bitter and violent fight. At least eight people were injured, some seriously, in a brawl over who was meant to be at the conference. Chairs were broken and the foyer of the East London convention centre was covered in blood.

On Sunday Ramaphosa condemned the violence that started on Saturday evening.

"It's something that we as the ANC should be deeply ashamed about. This is not behaviour expected of members of the ANC. We condemn violence as a method to resolve differences and disputes among us," he said.

Ramaphosa implored Mabuyane's leadership collective to "heal the wounds and unite the ANC in the Eastern Cape".

"We should not feel so victorious that we become arrogant. That we say hambani (go) to those who are not here or lost," he said. He called on the winning slate to embrace their political rivals. He expressed regret that ANC members were injured.

Embattled KwaZulu-Natal ANC chair Sihle Zikalala has said that if it means rerunning the controversial conference to achieve unity in the fragmented ...
Politics
3 years ago

Police had to intervene when ANC members and delegates attending the Eastern Cape elective conference at East London ICC turned on each other, with ...
Politics
3 years ago

After the fight Mabuyane's rival and former chairman Phumulo Masualle and his supporters left. But on Sunday they boycotted the conference and convened at the East London City Hall, where they bemoaned the alleged irregularities that occurred.

Supporters of Masualle, led by firebrand Andile Lungisa, are known to favour Nkosazana Dlamini-Zuma to be the next ANC president. Lungisa addressed supporters saying what happened at the provincial conference was "unfair".

While Ramaphosa was addressing the conference, an urgent bid was filed in the East London High Court for the conference to be ruled unlawful. Attorney Mvuso Notyesi filed papers on behalf of four ANC members who claim they were unfairly excluded from the conference. The outcome of the application will be known on Monday.

Ramaphosa used the occasion to speak out about using the courts to settle political scores.

"We must avoid mistakes we made in KwaZulu-Natal. As national leadership we took too long to address problems and challenges," he said in reference to a bruising provincial conference in 2015 that has since been ruled as unlawful by the High Court.

Turning to the ANC national conference, Ramaphosa said it ought to be seen as a "beacon of hope. The task is to forge unity. Seek to choose the leadership that will bind the ANC together."

Ramaphosa's campaign was popular at the start of the conference and it ended at full steam. Delegates sang songs and wore T-shirts indicating their support for him.

The Eastern Cape is the second provincial conference of the ANC to endorse Ramaphosa after the Northern Cape.

Before his address Ramaphosa told delegates not to sing songs supporting him in official ANC meetings as a decision had been taken to ban the practice.