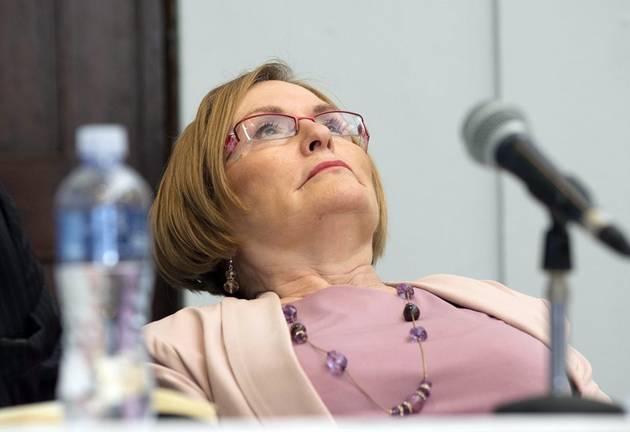 Zille was addressing the media about the Western Cape government’s water-saving measures and the green energy alternatives being used at government buildings. The province is experiencing its worst drought in 100 years.

Zille’s government’s plans will see savings of R500 000 per year on electricity thanks to the installation of solar photovoltaic cells on four government buildings‚ and more than 25 000 litres of water a day through the use of waterless urinals‚ flow restrictions and leak detection systems‚ among other savings measures.

"Hello. How much do you charge for 10,000 litres of water and how soon can you deliver?"
News
4 years ago

Zille said there were mixed messages painting a “confusing picture” in the media about the city’s alternative water solutions. She was referring to stories claiming that the City of Cape Town had cancelled its initial tenders for desalination plants. The city then said it had only cancelled tenders for three small desalination plants but had since re-issued two other tenders.

The first two plants are set to start operating in February next year.

She said when tenders went out‚ there was always going to be intense competition from suppliers and in certain cases‚ they didn’t understand that government had to go through procurement processes.

“The most important thing for us at the moment is to get our message straight; everyone has to do what they can to save as much water as possible and we have to do what we can to find alternative sources of water before day zero‚” she said.

But the opposition in the province has slammed both Zille and mayor Patricia de Lille for the handling of the water crisis.

“Hello. How much do you charge for 10‚000 litres of water and how soon can you deliver?”
News
4 years ago

“The ANC will call for an urgent constitutional intervention to put the Western Cape under administration as the DA cannot deliver on its promises‚” said Magaxa.

Xolani Sotashe‚ the ANC leader in the City of Cape Town council‚ said the city had been informed a decade ago‚ by a council-sanctioned report‚ when Helen Zille was the mayor‚ that by 2012 the city would experience a shortage of water.

He said De Lille and Zille had been warned a long time ago about the looming water crisis but opted to reject warnings.

“It’s the same administration ... who could not implement what was suggested by the report‚” said Sotashe.

The party then blamed DA infighting‚ saying none of the proposed alternatives - including desalination and drilling of aquifers - were on schedule.

“Measures [are] supposed to be in place already. It would be nice if we were differing about those [alternative water sources]‚” said Magaxa.