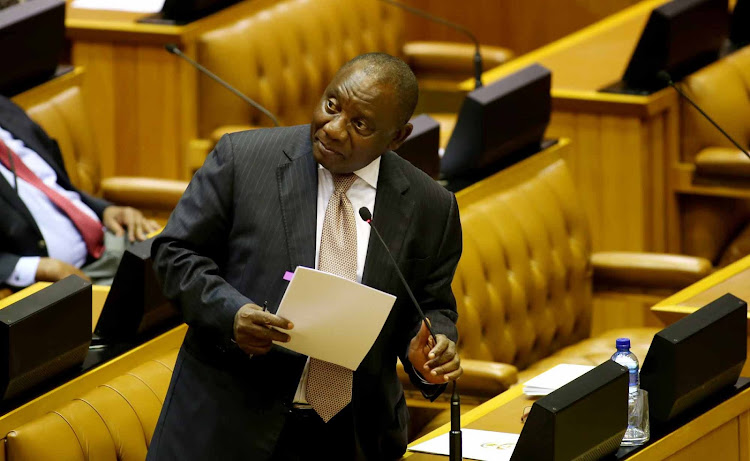 During a National Assembly question session on Wednesday Ramaphosa said: "I know for a fact‚ he has been busy at it and working out precisely how this commission should function."

He was responding to a question about whether or not he had been captured.

Deputy President Cyril Ramaphosa has addressed rumours that he is next in line to get the axe‚ telling Parliament that he serves at the pleasure of ...
Politics
4 years ago

He said the Gupta family should "welcome" the appointment of a commission of inquiry as it would give them an opportunity to clear their names.

Ramaphosa also took a hard line on corruption in state-owned entities‚ saying existing measures to ensure the "ethical conduct" of members of the executive and public representatives were clearly "not sufficient" and that lifestyle audits needed to be introduced as a "matter of urgency".

He said the "extent and nature" of corruption meant that it was a problem that could not be solved by government alone.

Ramaphosa seemed somewhat taken aback by a question from ANC MP Zukiswa Rantho‚ who is the acting chair of the public enterprises committee‚ currently conducting its own inquiry into state capture‚ who asked: "Why did you not do anything about the corruption?"

Ramaphosa admitted that there had been "some lapses" in the investigation and bringing to book those responsible.

Deputy President Cyril Ramaphosa could be the next casualty of a cabinet reshuffle‚ an insider has told news channel eNCA.
Politics
4 years ago

He also addressed rumours that he is next in line to get the axe‚ telling Parliament that he serves at the pleasure of the president.

During a question and answer session in the National Assembly‚ EFF MP Floyd Shivambu asked him about rumours that he would be removed as deputy president.

Ramaphosa said: “It is the President’s prerogative to appoint or remove me and if the decision is to remove me‚ I will accept it and I will continue to serve the people of South Africa in one shape or another.”

Following a cabinet reshuffle this week in which Blade Nzimande got the chop as minister of higher education‚ reports emerged that Ramaphosa could be next and could be targeted in a similar way to former finance minister Pravin Gordhan‚ using an intelligence report.

Ramaphosa told the house that the reshuffle‚ coming just a few months after the last one‚ “has added to the narrative of instability” but said these decisions were not up to him.

Asked what impact his firing could have on the economy‚ he said: “Whatever its impact will be will have to be analysed by a whole lot of other people.”

“Clearly he (Zuma) must have his own reasons why he appoints or removes people‚ which we are not privy to‚” he said.