Paying off debt is crippling SA 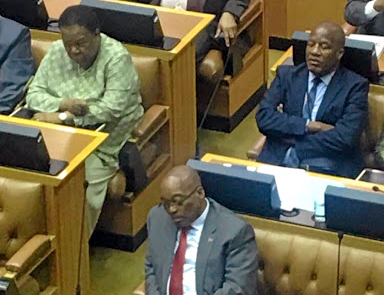 Finance Minister Malusi Gigaba has revealed that the gross national debt will shoot up to R3.4-trillion, or 60% of GDP, by 2020 as the government is forced to borrow more to fund policy implementation.

Presenting his medium-term Budget policy statement in parliament on Wednesday, Gigaba painted a grim picture of the state of the country's public purse, stating that the government was facing a budget deficit of R50.8-billion next year, which was projected to rise to R89.4-billion by 2020.

Gigaba said the government was faced with difficult choices in the next three years because the economy was expected to grow by only 1.2% next year before peaking at a modest 1.9% in 2020, allowing little growth in the tax revenue base.

Tax revenue was projected to be R1.4-trillion next year, rising to R1.7-trillion by 2020, but government expenditure was expected to rise to R1.9-trillion in 2020, leaving a budget deficit of just over R225-billion.

This means the government will, in the next three years, be forced to borrow more money to fund its spending plans, which would push the gross national debt to 60% of GDP, or R3.4-trillion by 2021.

Gigaba loses his swagger as he presents a bag of gunk

Debt-service costs are expected to rise from R183-billion in 2018 to R223-billion by 2021, making government loan repayments the fastest-growing expenditure item, at 11% of the Budget.

This means that the government would in the next three years be spending more money on paying its debts than on service-delivery priorities such as education, social development and health.

The education budget is expected to rise to around R400-billion a year by 2020, social development by R286-billion and health by R235-billion.

He said he was due to have a teleconference with credit rating agencies to discuss the country's dire financial position as part of his efforts to avoid further downgrades in the national sovereign debt rating.

"It's a very candid statement, it put the facts as they are," said Gigaba of his presentation.

He said that, because of dwindling tax revenues, the government would be forced to abandon some its programmes and would allocate new money only to those that were urgent.

While many applauded the candour in finance minister Malusi Gigaba's first policy statement‚ to some the content went down like a lead balloon.
Politics
4 years ago

The finance minister, who has been in the job for only seven months, acknowledged that the country's public purse was inadequate for its social needs.

"Any new policy proposals, or expansion of existing programmes, should address only the most effective and necessary interventions."

Gigaba's speech showed that the salaries of public servants are continuing to be a huge drain on the budget. They are expected to rise from just more than R580-billion in 2018 to R677-billion by 2020.

The government has set up a team of ministers - including Gigaba, Naledi Pandor, of Science and Technology, and Jeff Radebe, of Monitoring and Evaluation - to come up with measures to rein-in government debt accumulation.

The cabinet is considering the disposal of non-core state assets to raise money.