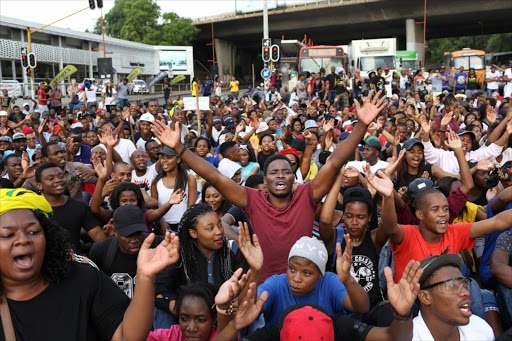 Wits students during a protest over the increase of tuition fees on October 19, 2015 in Johannesburg. File photo.
Image: Gallo Images / The Times / Alon Skuy

The report of the Commission of Inquiry which investigated the feasibility of making higher education and training fee-free in South Africa could be released within the next week.

The Presidency said on Saturday that the report would be released immediately after consultations with relevant ministries were finalised‚ which is expected to be during the course of next week.

The commission’s final report was received by President Jacob Zuma on August 30.

“The President will release the report immediately thereafter‚” the Presidency said in a statement.

The commission‚ which was chaired by Justice Arthur Heher‚ assisted by Adv Gregory Ally and Ms Leah Thembisile Khumalo‚ was appointed by Zuma on January 14 2016. It was expected to complete its work within 18 months. However‚ it was unable to and its term had to be extended till the end of June this year.

The higher education system is constipated and, if left untreated, the number of black students who complete their studies will continue to drop.
News
4 years ago

The University of Cape Town went to court on Thursday afternoon‚ aiming to halt protests that have closed the institution.
News
4 years ago

Protesting UCT students won't back down

At a mass meeting at the University of Cape Town on Thursday protesting students resolved to reject the presence of private security on campus. They ...
News
4 years ago

Classes were disrupted for a second day at the University of Cape Town on Thursday as students calling on the President to release a report on ...
News
4 years ago