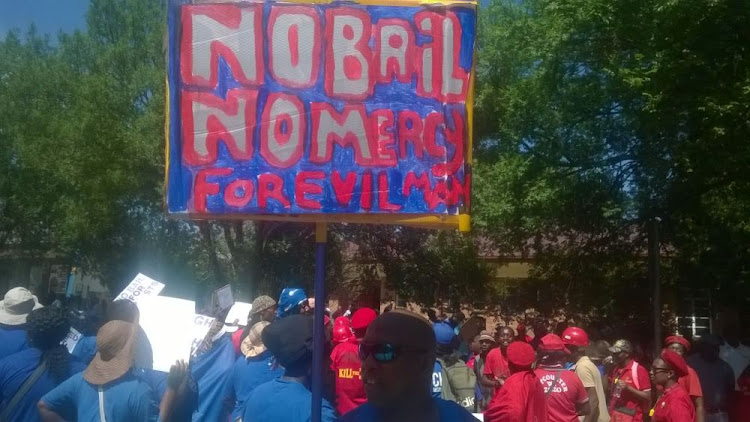 Protesters chanted "Kill the boer‚ kill the farmer" outside the Bronkhorstpruit magistrate's court on Thursday ahead of the appearance of a man who allegedly raped his domestic worker.
Image: Sipho Mabena

Protesters in DA‚ ANC and EFF party regalia chanted the contentious "Kill the boer‚ kill the farmer" slogan outside the Bronkhorstpruit magistrate's court on Thursday ahead of the appearance of a man who allegedly raped his domestic worker.

In 2011‚ the Equality Court in ruled that the words “shoot the boer” amounted to hate speech in a case in which Afrikaner interest group AfriForum took then-ANC Youth League leader Julius Malema to court for chanting the song.

The streets around the court were littered with rubbish on Thursday‚ strewn by the enraged protesters who called for justice to be served and the suspect to be denied bail. Police fired stun grenades to control the crowd emptying bins on the street.

The 45-year-old man was arrested last week for allegedly dragging the woman into a room‚ where he allegedly raped her until the early hours of the next day. According to police the man then forced the woman to perform sexual acts on his dog.

The court gallery was packed to capacity‚ with tensions running high as one man in EFF shirt screamed at a white police officer who was taking pictures of the people in the public gallery. "Even worse‚ you are white. It is your brother who did this. Don't take our pictures you white woman‚" he yelled.

The defence has indicated that the accused will abandon his bail application until a later stage.

Society for the Prevention of Cruelty to Animals spokesperson Andrew Kekana said they removed the suspect's two dogs on Wednesday.

The man arrested for allegedly raping his domestic worker and then forcing her to perform sexual acts on his dog has abandoned his bail bid‚ the ...
News
4 years ago

The Family Violence‚ Child Protection and Sexual Offences Detectives in Ekangala are investigating a case of rape following the alleged rape of a ...
News
4 years ago

The ministry of women and children and the anti-abuse campaign Not In My Name have expressed shock and outrage at reports of an employer who ...
News
4 years ago