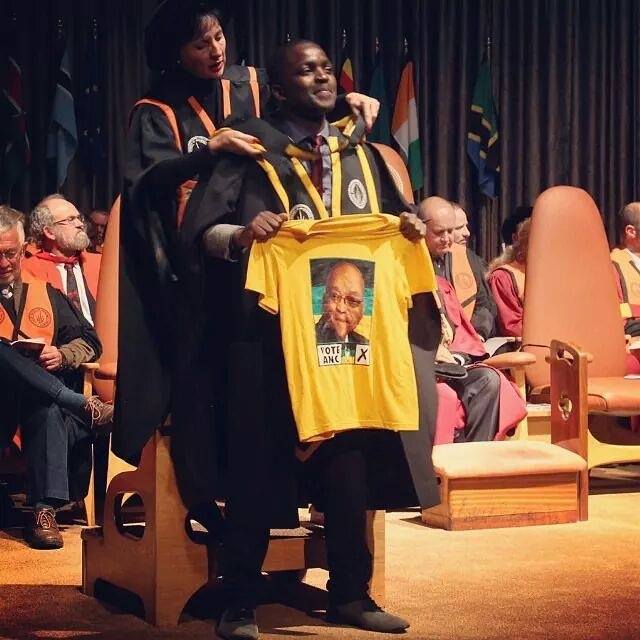 Mukovhe Morris Masutha graduated with a Masters of Science in Economic Geography at the University of Johannesburg .
Image: Siphile Buthelezi‎ on ANCYL GP Facebook

President Jacob Zuma is planning to make a shock announcement‚ introducing free education across the board through a controversial funding plan that flies in the face of the findings of the Heher Commission‚ government insiders say.

The plan‚ apparently devised by Zuma’s future son-in-law‚ Morris Masutha‚ would also defy official ANC policy. It could see the cutting back of departmental budgets across government to make R40-billion available for the 2018 academic year.

Zuma has been withholding the 748-page commission report‚ in which retired judge Jonathan Heher reportedly found that universal free tertiary education was not feasible.

The announcement is thought to be imminent but the Presidency on Monday night said there were no plans by the president for any announcement on Tuesday.

Masutha‚ who is engaged to be married to Thuthukile Zuma‚ the president’s youngest daughter from his marriage to Nkosazana Dlamini-Zuma‚ referred questions to the national Treasury.

"I think you might want to get input from those respective departments [presidency‚ higher education‚ and national Treasury] ... And not me personally‚" he said.

The Department of Higher Education was not immediately available for comment.

Masutha‚ who has apparently acted as Zuma’s "point man" on the fees issue‚ has made presentations to ANC officials and an inter-ministerial cabinet committee on his self-devised funding plan‚ which essentially revises the national Treasury’s entire budget.

Zuma has apparently assigned Minister in the Presidency Jeff Radebe and his director-general, Mpumi Mpofu, the task of implementing the plan‚ which requires cutbacks in departmental budgets to make funding available. Mpofu‚ who was appointed in July‚ is said to have been working with a team from the Treasury to "find the money for Zuma".

A government insider said the matter was dealt with directly by the director-general outside the ordinary work of the department.

If the plan proceeds‚ it is likely to cause chaos throughout the state system as budgets are allocated according to programmes.

It also undermines Finance Minister Malusi Gigaba’s statements when he presented the Medium-Term Budget Policy Statement last month. He said a funding shortfall of more than R61-billion over the next three years would be created if the government were to finance the full cost of study for 40% of undergraduates.

He said further announcements on higher education funding would be made in the February budget.

If Masutha’s plan is adopted‚ it could be an instant trigger for a credit downgrade to junk status by rating agencies.

But sources say Zuma has disregarded the Treasury and Heher Commission’s findings and believes his future son-in-law has found a solution to the higher education crisis.

Masutha‚ 28‚ is the founder of the Thusanani Foundation‚ an education NGO working on addressing disparities in rural schools.

At his graduation ceremony at the University of Johannesburg‚ where he was receiving his master's degree in local economic development‚ Masutha held up an ANC T-shirt bearing an image of Zuma’s face‚ apparently as a statement against white academic staff.

Earlier this year‚ Masutha said free university education would come with an estimated cost to the state of between R6.5-billion and R7.5-billion.

He proposed that the government should foot the bill for tuition fees‚ accommodation‚ meals‚ transport and all study material. "No poor and working class student must be partially funded‚" he wrote at the time.

ANC spokesperson Zizi Kodwa said he did not know of any plans by Zuma to announce free tertiary education.

ANC insiders said they had heard of Masutha’s proposals but did not know whether these would be feasible at all.

As the author and publisher of an explosive book revealing South Africa’s “shadow mafia state” prepare for a showdown with government agencies The ...
Politics
4 years ago

The stomach-churning stench of human faeces‚ piles of rubbish‚ ripped curtains and a naked woman being dragged into a police van greeted students at ...
News
4 years ago

The higher education system is constipated and, if left untreated, the number of black students who complete their studies will continue to drop.
News
4 years ago